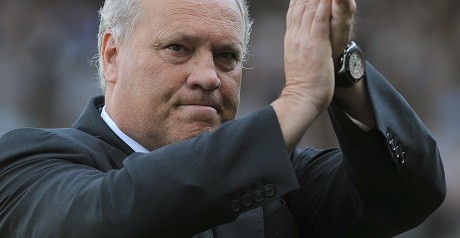 Martin Jol admitted he was a very relieved man after Fulham ended their poor recent run of results with a come-from-behind victory over Everton tonight in the Capital One Cup.

Fulham reached the fourth round courtesy of second half strikes from Dimitar Berbatov and substitute Darren Bent, but their progress in the competition was in a real doubt after a dire first half which saw them trail to an early Steven Naismith goal. Jol had to endure boos from some Fulham fans after his side squandered a lead late on against West Brom eleven days ago and his side were booed off at half-time here, with his six changes from the weekend defeat at Chelsea not having the desired impact.

It’s a big relief. It was a long time ago since our last win against Sunderland, and today we wanted to get back to winning ways. It has not been easy, but in the second half with Berbatov and Bent there was enough goals and if there is enough goals we can win.

The goal they scored was a hammer blow, everyone was thinking ‘there we go again’. But people like Scott Parker are a big influence, I am happy he’s here. He’s a leader. Of course there are other experienced players, but I’m very happy with his influence. He comes from another club, and he tells the players if we’re doing ok, or if we need more goals, or to be a bit more clever. That’s what he adds to us.

Bent’s goal just came out of nothing. He is a talented player,and hopefully we can integrate him now.