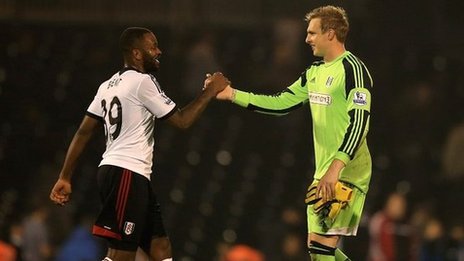 This was a tense evening at Craven Cottage. Fulham were laboured, pedestrian and predictable in the first period and afforded Everton’s adventurous midfield far too much space, which they exploited to great effect through Steven Naismith’s intelligent runs across the back line. But, just as you thought you’d seen this movie far too many times in recent weeks, Martin Jol’s side responded with a high-tempo second half, full of pace, passion and a hatful of chances. Far from being shot-shy, Fulham had 23 attempts at goal last night – and that new-found forward momentum should serve them well in three upcoming crucial league fixtures – against Cardiff, Stoke and Crystal Palace.

Stockdale: A solid display from the Fulham goalkeeper after the disappointment of conceding that sloppy first goal at Stamford Bridge. Made a smart save from Naismith prior to the Everton goal and produced two brilliant stops with his legs late on to deny Coleman and Lukaku splendidly to preserve Fulham’s advantage. 7

Zverotic: This was an eye-catching debut from Fulham’s new Montenegrin signing. Although most comfortable as a defensive midfielder, Zverotic’s versatility means he can cover several positions and he certainly didn’t look out of place at right back. Defensively solid against the impressive Naismith, Zverotic was comfortable on the ball and eager to come forward. He sent over a dangerous early cross for Berbatov and often supplemented the attack superbly. On this evidence, there’s now some welcome competition for Sascha Riether. 8

Senderos: Offered a first-team chance after Jol opted to rest Fernando Amorebieta, Senderos was dependable enough but at times struggled against the pace and physicality of Romelu Lukaku. Made a couple of timely blocks and clearances as Fulham came under pressure in the closing stages. 6

Hangeland: This must be pretty close to Hangeland’s best display of the season. Commanding the air and composed on the ball, the Fulham captain’s reading of the game was first class. He rescued his side from danger several times, making one outstanding last-ditch saving tackle to end a dangerous Deufoleu run and eventually managed to nullify Lukaku’s threat. 7

Riise: His struggles against the pace and inventiveness of Deufoleu showed just why Riise’s slipped so far down the pecking order in recent months. The Norwegian veteran seemed reluctant to close down Deufoleu and when he did the on-loan Barcelona winger simply danced past him. The assured nature with which he raided forward seems to be a thing of the past too and his only real attacking combination, a hopeful shot from the edge of the box that flew high into the Putney End smacked of desperation. 5

Karagounis: The Greek veteran got some game time and delivered an accomplished performance anchoring the midfield. Strong in the tackle as usual, showed for the ball regularly, kept possession well and as Taarabt drifted infield, took up some promising positions on the left. A clever bit of improvisation from the free-kick gave Bent a shooting chance for the winner and he came through the final ninety minutes unscathed. 7

Parker: He might have played Naismith onside in a desperate attempt to provide some cover for the defence, but barring that blemish, Parker was excellent last night. His organisation and leadership qualities, mopping up in midfield, came into their own during a disappointing first half and he was quite happy to carry the ball forward too. With every game, he looks an excellent addition – and should he stay fit, Parker will have a defining impact on our season. 7

Kacaniklic: Playing him from the right didn’t really work. Eager to cut inside onto his favoured left foot, the Swede was easily marshalled by Everton’s defence. Took up some good positions infield but too Fulham failed to find him in the first half. Had a powerful shot tipped wide by Robles as the Whites pressed for an equaliser at the start of the second half and looked far more effective in his natural left-wing position once Taraabt had been substituted. 6

Taraabt: Struggled to impose himself on the game from the left. Full of tricks and eager running, but his end product amounted to little. Fed a few clever passes into Berbatov’s feet, but couldn’t get beyond the central striker, which is where you feel he’ll be most effective. Faded badly before being replaced – and you feel he’d be much more regular threat to defences if deployed just behind the striker. 6

Kasami: Followed on from an impressive display at Stamford Bridge with a high-octane performance, showing the level of maturity and inventiveness that had everyone so excited two summers ago when he arrived at Craven Cottage. Very industrious, he became far more involved in the second half, driving forward to great effect and sending over some dangerous crosses. Will be very interesting to see whether he keeps his place against Cardiff come Saturday. 7

Berbatov: Quiet in the first half, but so eager to influence proceedings he often dropped deep to show for the ball. Perhaps should have done better with his two headers, the first when he arched his back to reach an inviting Zverotic cross and the second inside the six-yard box from a corner. Showed his predatory instincts to pounce when Coleman’s tackle on Taraabt brought the ball his way to equalise and complimented Bent well in the closing stages. 7

Amorebieta: Has been really impressive coming off the bench to offer an attacking option at left back in the last two home matches. Quickly let Deufoleu know he was around with a crunching tackle by the touchline, which saw the Everton winger switch flanks, and gave Fulham far more going forward than Riise had. Delivered a couple of excellent crosses – and might be considered as a serious option at full-back now. 7

Bent: Made his mark on proceedings almost immediately with an instinctive finish from Karagounis’ quickly-taken free-kick. His pace offered a threat in behind the Everton back-line that Fulham had previously lacked, although he still looks some way short of his sharpest. Jol spoke afterwards about the need to ‘integrate’ him more, so a switch in system to pair Bent with Berbatov could be on the cards. 7