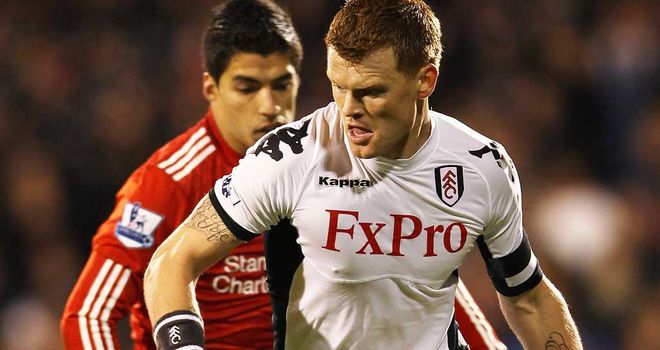 When John Arne-Riise signed from Roma for what seemed a bargain fee back in 2011, I think most Fulham fans would have both been delighted at the news and eagerly anticipated his contribution. Known – from his previous years in England with Liverpool – for scorching off-the-ball runs from left back into the opposition box and a left foot so fierce it could rival the hammer of Thor (it literally broke someone’s leg once), the prospect of Riise at Fulham was an exciting one and representative of Martin Jol’s attacking philosophy with an emphasise on wing play.

Fast forward two years and the club are so keen to get him – and his wages – off the books that they’ve let him know that he is available to leave for free, despite having a year of his contract remaining. Most fans wouldn’t bemoan his exit either, despite having just injury-prone Richardson and the inexperienced Briggs remaining as left back (although, we’ve been closely linked with Aaron Cresswell, a very good young left back). Werder Bremen have publicly announced their interest, and Riise has implied his unhappiness at both Richardson being first choice left back in pre-season and with the general situation at the club. All in all, it seems as if a move away would suit everyone.

So where did it all go wrong for the man who never lived up to his reputation? I think it’d be more apt to say it was never right to begin with. His debut against Villa at home saw Murphy pick out a surging Riise who escaped behind the defence, only to drag his shot wide. A sign of things to come we’d have hoped, but it turns out we should have been paying more attention to the missed shot than the movement. His form quickly disappeared, and he offered none of that blazing shot or enthusiastic running we’d thought he had in him, although it picked back up again towards the end of the 2011-2012 season. Last season was entirely unspectacular however – in a season full of disappointments, to be fair – reaching a crux at the end of the calendar year when, against Southampton at home, he dummied a clearance while under pressure from opposition midfielder Ramirez, before turning and walking back to the half way line while the ball was still in play (Ramirez picked the ball up, cut in to the box and the ball was cleared, but part of me wanted them to score just to show Riise up). He was dropped for a while after that, with Jol’s patience finally snapped, and it looked as if he wouldn’t play again before Richardson picked up another injury, giving Riise a few games at the back end of last season where his exuberant running seemed to completely disappear.

A player who game with big expectations, Riise has been utterly underwhelming, and it’s a shame because I was really expecting him to provide a lot of fun on the pitch. I was hoping he’d be able to make an impact at least this season after hearing of his intense off-season cardio work, but not much has appeared to have changed, and I think the final straw really was when we were away at Liverpool earlier this year and he paid more attention to the home fans than to his own. Two seasons in and not a goal to his name, it looks like time has run out for Riise in England, whether he stays with Fulham or leaves for pastures new.