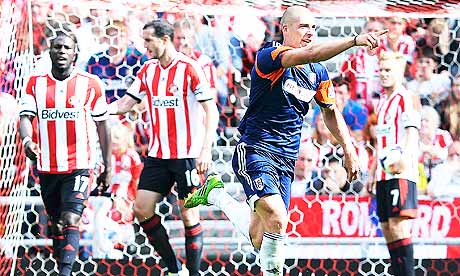 Martin Jol was delighted that Pajtim Kasami rewarded his faith after opting to include the Swiss midfielder in his first Fulham starting line-up of the season.

The 21 year-old headed his first Fulham goal as the Whites held on to claim a narrow victory at Sunderland on the opening day and certainly made the most of his first Premier League start for two years. Kasami, who ended last season on loan at Lucerne, replaced Bryan Ruiz in the starting line-up and produced a superb performance full of tireless running and endeavour.

Jol was delighted with Kasami’s impact and has challenged him to maintain that level of performance:

For a young kid to score his first Premier League goal and the winning goal – of course it is what I want for him. I sent him to Switzerland last season because he’s got talent and is a strong kid. He came back and did well in pre-season.

Because Bryan Ruiz didn’t come back until Friday, I thought maybe it was good to start with Kasami. He was happy that I chose him and I was happy with him.