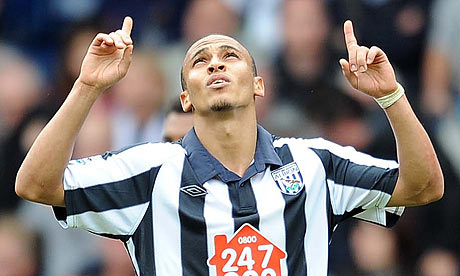 The Nigerian striker, who has looked set to leave the Hawthorns ever seen he turned up at Loftus Road without his club’s permission in a bizarre attempt to force through a transfer to QPR on deadline day, was thought to be close to signing for Crystal Palace, who have tabled a bid believed to be in the region of £1.75m last week. But the Mirror believes Fulham are interested in hijacking the deal and resurrecting their interest in signing the 31 year-old.

Manager Martin Jol had placed Odemwingie on his initial list of transfer targets after taking over from Mark Hughes two years ago and is in the market for a new striker after the release of Croatian international Mladen Petric this summer. Odemwingie, who has scored 31 goals in 90 appearances for the Baggies since joining from Lokomotiv Moscow in August 2010, has a year left on his current Baggies’ deal.