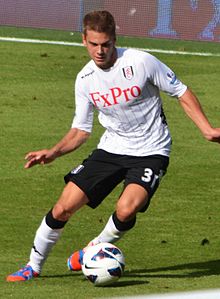 Alex Kacaniklic is keen that Fulham put their disappointing campaign behind them – and believes that the Whites can make progress after what he believes will be an exciting summer.

The Swedish winger started and finished the season well, scoring in both the opening day demolition of Norwich City and opening the scoring in the final day victory at Swansea City, but recognises that Fulham’s campaign was ultimately well below par as the side failed to replicate their enterprising early-season performances. Kacaniklic, who used a loan spell with Burnley to reinvigorate his own season, is targeting a top half finish next term and a possible return to European football.

We started very well, for the first five or six weeks we were high up the table. In fact, there were two times when we could say we were at the top! Okay, that was after the first game following the 5-0 defeat of Norwich City and for a very short period when we were beating Manchester United, but it was still nice to say that.

At times I thought we could go on and finish in a very good position, but for whatever reason, it wasn’t to be. We’re a team that always tries to play good football, no matter what, and sometimes things just didn’t work out or go our way. It was a disappointing way to end the season as, traditionally, we’re a side that finishes campaigns strongly. It would have been nice to have done that again and got more points on the board. But that’s something we will address over the summer, and work hard to start the 2013/14 season in good form.

Overall, we did alright, but we can’t deny that with the players we have in the team that we should’ve done better. But football is a difficult and unpredictable game – and sometimes it doesn’t always work out like that. The summer break is important as we have to keep fit, and pre-season will be the chance to work on a few things in preparation for the new season. It’s an opportunity to move on and look towards a new challenge and enjoy a better campaign.

The summer is an exciting time, we will see players coming in and it will be interesting to see who the Club signs. Of course, there will be a few players departing too, so it will be sad to seethem move on.

Kacaniklic, who has established himself as a regular in the Swedish national squad, will be hoping to take his fine form from the tail-end of last season into the new campaign and become a first-team regular on the banks of the Thames. Martin Jol has shown tremendous faith in the former Liverpool winger, having put him straight into the first time after his early return from an impressive loan spell with Watford two years ago. Whilst the manager had been critical of some of his defensive work, Kacaniklic has worked hard at that side of his game and Fulham fans will be keen to see more of his impressive link-up play with Dimitar Berbatov come August.