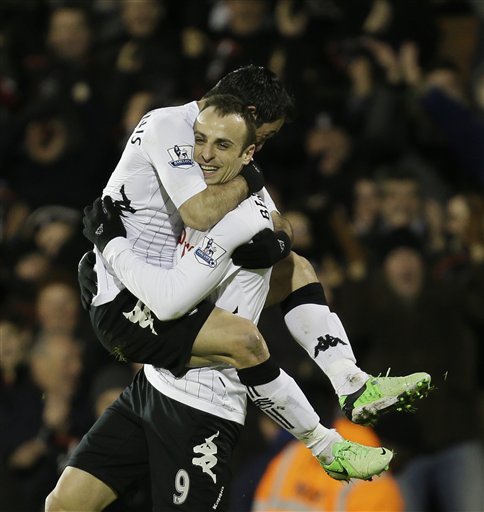 Dimitar Berbatov believed Fulham were always likely to hold onto their advantage in a topsy-turvy West London derby despite what he described as ‘childish’ second-half defending.

The Bulgarian striker had helped established the home side’s strong position in the contest with a quickfire double courtesy of two mistakes from Chris Samba. The QPR defender first felled Ashkan Dejagah to give away a penalty and then dallied on the ball in front of Damien Duff – and Berbatov freely admitted that he quickly targeted the error-prone centre back.

Yeah, you can see [players are nervous] sometimes. In the first couple of minutes you can see which players look nervous or [who] is having a bad game. So you try to push and press on them, which was the case with their player when we scored the second goal. You need to be clever in a situation like this because if you take advantage of them like you should, we score.

A second half slump almost saw Fulham squander their three-goal lead with the Whites indebted to goalkeeper Mark Schwarzer for two fine second half saves: the first from a Loic Remy penalty and a late stop from former Fulham forward Bobby Zamora. Berbatov, however, always felt his team were in control.

We weren’t nervous but we almost threw the game away. We had a comfortable lead in the first half – three goals is a lot – and the something in the second half, a bit childish maybe.

They scored the second goal and started to believe. But in the end we held onto the three goals we scored. We could have scored more but in the end three points was good for us.

The only time they can score is when we make a mistake, so the goal for them lifted their spirits. If you look back, you see mistakes and try to correct them next time, but now we’re going to celebrate the three points.

Berbatov also insisted that Sky Sports should have given the man-of-the-match award to Schwarzer after his goalkeeper’s fine display.

I think you should give [the man of the match award] to [Schwarzer], or I will be giving it to him in the dressing room, because it’s not the first time he’s saved a penalty. He’s a great goalkeeper and without him I don’t think we were going to win this game.

The 32 year-old was also quick to reaffirm that he’s happy at Craven Cottage and downplayed suggestions that Fulham were ever in any danger of going down themselves.

It’s great, I’m enjoying my football here. You can see it on the pitch, by the goals I score and the way I’m playing. It’s going great for me, and for the team, so I hope it continues this way.

We’ve always been safe. I don’t see why anyone should worry. We play good football and sometimes we make childish mistakes which is why we suffer, but if we correct this we will be even better.