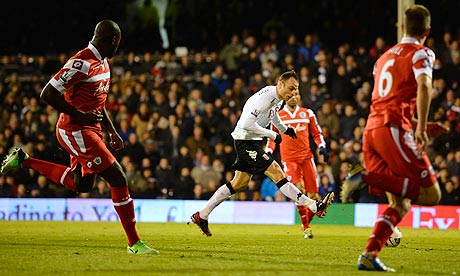 For 44 minutes, it appeared as though this west London derby would prove as straightforward as last September’s sunny stroll when Fulham put six past Queen’s Park Rangers. Fired up by the memory of an abject pre-Christmas surrender at Loftus Road, Fulham were formidable, flying out of the starting blocks, and the speed of their start suggested that they might better last season’s margin. Dimitar Berbatov confidently converted a penalty and stroked home a second after being presented with the ball by an all too accommodating Chris Samba, before the hapless Clint Hill turned a John Arne Riise cross into his own net.

All three goals – and Rangers’ complete lack of organisation – demonstrated why Harry Redknapp’s side had struggled to keep pace with the rest of the Premier League. Just before the break, a stupendous solo goal from Adel Taraabt, his second such sensational strike against Fulham this season, seemed simply a consolation. It actually threatened to turn the tie on its head. Rangers were revitalised after the break. They should have had a second when Giorgis Karagounis, whose careless pass had allowed Taraabt to set off on his mazy dribble before the break, felled the Moroccan inside the box but Mark Schwarzer sprung to his right and saved Loic Remy’s tame penalty. Fulham’s reprieve was short-lived: two minutes later, Remy spun away from Phillipe Senderos and lashed a drive in off the underside of the crossbar. When Steve Sidwell saw red for a tackle on Armand Traore, the dynamics of the contest were totally transformed.

Fulham hung on as their home fans gleefully reminded their visitors of their perilous predicament. Perhaps it was QPR’s desperate plight that persuaded Redknapp to field Taraabt, Remy and the former Fulham striker Bobby Zamora in the same starting eleven. It was a high-stakes gamble that backfired badly. Rangers were robbed of the defensive solidity that had neutralised Berbatov at Loftus Road – and were far too open as a result. With their Bulgarian maestro to the fore, Fulham made the most of the gaps that quickly appeared.

Samba’s charity had a lot to do with Fulham’s fast start. Far from being the big-money replacement for Ryan Nelsen, he was the weakest link in a QPR back four that hardly covered itself in glory. One aberration followed another. A poor touch presented the ball to Ashkan Dejagah and a clumsy challenge conceded the penalty, which Berbatov tucked away with the minimum of fuss. That mistake seemed to transform the £12.5m centre back in a bag of nerves. He then inexplicably tried to dribble around Damien Duff twenty yards from his own goal, allowing Berbatov to steal in and roll his second of the net past a stranded Julio Cesar in an instant. Samba’s embarrassment was complete when he was bamboozled by a backheel from his opposite number Brede Hangeland and Riise’s cross rebounded into the net off Hill.

Fulham’s dominance was barely reflected by the half-time scoreline. Duff, who dovetailed delightfully with Riise down the Fulham left, almost surprised Cesar at his near post with a low shot and Hangeland, who had handed Fulham a timely boost last week by committing his future to the club with a new contract, headed wastefully wide when left unattended from the Irishman’s free-kick. The home side were in complete command, stroking the ball around imperiously and looking threatening with every attack. Berbatov caught the eye not just for his finishing, but a couple of majestic touches – the most breathtaking of which saw him bring down a high ball on the corner of the penalty area and burst away from Traore in the blink of an eye.

It was to Rangers’ credit that they managed to make a game of it. Were it not for a splendid Schwarzer save from Zamora, the visitors might have snatched a point after a much improved second half showing. It would have merely papered over the cracks of the abject defending that has blighted their second season in the top flight – and the outlook looks remarkably bleak. While Fulham could contentedly consider a late assault on the top half, Redknapp’s Rangers appear destined for the Championship.