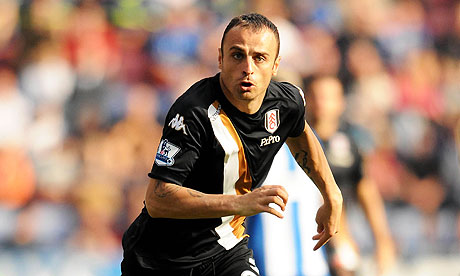 In The Guardian’s Friday Premier League preview, Stoke City’s lunchtime visit to Fulham was described as ‘the season’s first truly meaningless’ encounter. It might not capture the imagination of a neutral, but they’ll be plenty of interest at Craven Cottage in a couple of hours. While improved performances since Christmas might have lessened some of the nervousness that followed Fulham’s wretched winter run and Martin Jol’s side now sit in mid-table rather than looking over their shoulders to snatch lingering looks at the relegation zone, three points against Tony Pulis’ team should set them on a course to safety.

Since the departures of Mousa Dembele – who served a reminder of his enduring quality in Lyon on Thursday – and Clint Dempsey towards the close of the summer transfer window, Fulham have been missing a spark in central midfield. Jol was quick to identify a lack of a cutting edge after a dire draw at Norwich two weeks ago, with the visitors mustering just a single shot on target at Carrow Road. This has been a season of making and mending rather than the exhilarating campaign a few of us dared to dream about after those racy early-season displays. Chris Baird and Steve Sidwell did enough as a makeshift central midfield partnership to keep Fulham above water, but breaking into the top ten requires an upgrade.

Jol did at least rectify that by the end of January. In came a clutch of midfielders designed to fill the breach left by those who departed Craven Cottage in the close season. Envious glances have been cast towards Blackburn since Danny Murphy swapped the Fulham captaincy for the Championship in search of a longer-term deal, not perhaps because of the veteran’s swashbuckling athleticism, but more for his football brain and those cerebral qualities that the current side’s pedestrian and one-paced football has seemed to lack. Dickson Etuhu’s bite would be useful against this afternoon’s opponents, too, and there’s a nagging doubt about just how long Jol can count on the evergeen Giorgos Karagounis to rage against the dying of the light.

Mahamadou Diarra has been a massive miss since injuring his knee on international duty with Mali – and Jol handed the Arsenal midfielder Emmanuel Frimpong, full of social media savvy and the eagerness of youth, a first appearance in a Fulham shirt at Norwich. He provided the physicality Fulham have lacked during Diarra’s absence, but looked like a red card waiting to happen long before Jol opted to replace him with Urby Emmanuelson on the hour. The Dutch midfielder, who has slotted into central midfield with all the poise of Dembele despite spending most of his career out on the left, has all the hallmarks of quality – the ability to carry the ball at pace, an eye for a pass and time on the ball – which is probably why AC Milan are so keen to have him back at the San Siro come the end of the season. It can’t be long before he starts a Fulham game for the first time.

Solving the midfield conundrum is vital for another reason to. It would stop Bryan Ruiz and Dimitar Berbatov treading on each other’s toes as they come deep to retrieve possession. Berbatov, Jol’s marquee signing, is far more effective stalking centre halves in the final third and providing a finishing touch to flowing moves, but Fulham’s inability to provide him with the ball in these areas has led to the Bulgarian roaming around the midfield desperate to have an influence on proceedings. You have to feel for Ruiz, too, pressed into service as a central midfielder against Manchester United and shoved out onto the right side of a four-man midfield at Norwich, when his most fluent Fulham showings have come operating behind a lone striker. The two classiest members of this Fulham side need the space and the service from which to shine – and providing it for them remains a real work in progress.

Stoke have an away record to rival Fulham’s historically meagre return on the road, of late, having mustered just a single success in their last 22 Premier League games away from the Britannia Stadium. Four points separate these sides in the table prior to kick off and, although Pulis has refined his side’s style since their agricultural early days in the top flight, winning the physical battle will prove paramount. The visitors could hand a debut to their January arrival from America, Brek Shea, who recently scored in a behind closed doors friendly. Fulham will need to be at their best to return to winning ways this afternoon – and Jol’s priority will be finding the net, as his side have failed to score in three of their last four league outings.