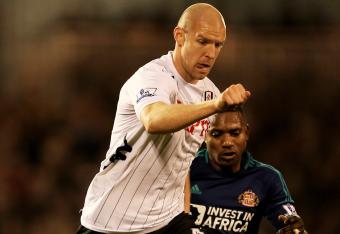 Phillipe Senderos feels Fulham’s defence might just be returning to their miserly ways after a resolute rearguard effort secured a first clean sheet since November at Norwich on Saturday.

The Swiss defender played his part in Fulham’s first clean sheet in fourteen games at Carrow Road and, although Martin Jol was left disappointed by his side’s lack of a cutting edge up front, there could be no faulting the application at the other end of the pitch. The result was even more impressive when Stanislav Manolev was such a late call-up to the squad to replace the sick Sascha Riether that he had to hurry up to Norfolk in a cab on Saturday morning.

As a defender, I’m definitely happy that we didn’t concede. It’s been a while since we’ve had a clean sheet and it feels good to know we can rely on our defensive stability and, hopefully, we can do that in the next game and push on and score some goals.

We have to take the positives from the game. I think a draw away from home – especially with a clean sheet – is a positive thing. We kept it tight at the back and we were hoping we could create a few more chances in the second half but, unfortunately, the goal didn’t come. But we stayed strong and it’s important that we keep a good stability and build on from the point.

It was important to be strong at the back and not give them any chances and then try and push on forward. As soon as we got behind their midfield it was quite difficult and we needed to turn the screw a bit more and make sure we play that last pass, but we gave them time to get back into position. It didn’t quite happen for us but the point is the important thing and we moved forward in the table with that.

Senderos has kept his place in the side since replacing Aaron Hughes for the 3-1 win over West Ham and is hoping to try and secure a run in the first team alongside skipper Brede Hangeland.

I’m really pleased to be back in the side and bringing my qualities to the team. Hopefully I can give good performances and keep my place. We’ve got a little while until our next match now so we’ll regroup and recover – it’s been a busy period and now we have a weekend off so it’s time to focus. We’re at home so it’s an especially good opportunity to move forward.