Horsfield recovering from blood clot on his lungs 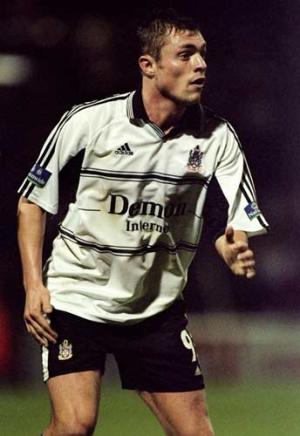 The Birmingham Mail carries a moving interview with former Fulham striker Geoff Horsfield, who is recovering after blood clots on his lungs left him close to death for a second time.

Horsfield, who has already fought a successful battle against cancer, was rushed for emergency hospital treatment last month after experiencing excruciating pain. Doctors discovered potentially life-threatening blood clots on both of his lungs – which they believe could have been caused by Horsfield’s habit of exercising on a treadmill. Horsfield, a father of four, admitted he had never felt any like the terrible pain that woke him up early in the morning last month:

I am very, very lucky. This came from nowhere. I’ve never known pain like it, and after what happened with the cancer I know I’ve had an escape again.

It was about 4am and I was crying my eyes out, I couldn’t breathe.  From my shoulder blades down to my backside, it was if there was someone stabbing me in the back. I told my missus, Tina, that I’d just take a couple of tablets and hopefully it would go away. But she could see I was in a state.

She called an ambulance and I was taken to Burton Hospital. They injected my leg with morphine on the way there and it was thought I may have cracked a rib and punctured my lung. I said “but how have I done that?”, though, and had a scan. When the results came back they told me they had good news and bad news: the good news was that I hadn’t broken any ribs, the bad news was that I had blood clots on my lungs.

I had several on my left hand side, several on the right, including a very big clot. I couldn’t believe it. And I wasn’t aware of how serious it might have been until the nurses told me that had circumstances been different, had the clots not gone to my lungs but straight to my heart, it would have been game over.
In the last two weeks I’ve had morphine, tramadol, codeine and paracetamol. I’ve lost one-and-a-half stone in weight and can’t do anything. I’m out of breath even if I go upstairs. The tablets have turned me into a zombie and I’ve not been able to sleep. But I am just so thankful that I was rushed in to hospital when I was and the treatment I received was first class, I can’t thank the consultants and nurses enough.
I know my own body, I know when I’ve had a pull when I’ve played football. I felt something but it didn’t hurt and I carried on. That’s when it started. Five to seven days later, I was taken to hospital. I’ve been told something like this is hereditary. When Tina [his wife] rang my mum to tell her what had happened she collapsed on the kitchen floor as my nan died 12 months to the day from a blood clot to the lung. So, so scary – I am just thankful I’m still here.

Horsfield, a firm crowd favourite at every club he played for due to his energy and work rate, signed for Fulham after then manager Kevin Keegan was impressed the former brick-layer’s start to professional football, scoring seven goals in his first ten Third Division appearances for Halifax, whom he had helped fire to the Football League. Horsfield, who joined Fulham for £300,000 in October 1998, had an immediate impact at Craven Cottage. He scored fifteen goals in 28 games as the Whites romped to the Second Divison title – and when Keegan took on the national team job, chants of ‘Horsfield for England’ could be heard from the terraces.
Having made the PFA’s Second Division Team of the Year, Horsfield’s physicality aided Fulham’s start to the First Division season under new manager Paul Bracewell. He scored twice at St. Andrew’s on the opening day of the season and was sent off for violent conduct and, although he was less prolific in front of goal at a higher level, Horsfield still finished the 1999-2000 season as Fulham’s top scorer with fourteen goals. Seven of those goals came in the League Cup – including a sublime strike in the third round win over Tottenham – as Fulham reached the quarter finals before losing on penalties at Leicester City.
Bracewell’s replacement Jean Tigana felt Horsfield was too one-dimensional to fit his more continental style and replaced the burly forward with Louis Saha. Horsfield joined Birmingham for a club record £2.25m, becoming the Blues’ top scorer in his first season at the club and he scored twice in the League Cup semi-final to fire Birmingham to a showpiece final against his boyhood club, Liverpool, which they lost after a penalty shoot-out. The following year, Horsfield was voted Birmingham’s player of the year after helping the club return to the top flight via the play-offs, scoring the equaliser against Norwich in the final.
Horsfield scored his first league goal in a famous derby win against local rivals Aston Villa and, in the return fixture, he ended up replacing the injured Nico Vaesen in goal after Blues’ had used all of their substitutes. Despite being used largely as a substitute by Steve Bruce, Horsfield’s partnership with French World Cup winner Christophe Dugary helped keep Birmingham up as the club managed four wins and a draw in the final five games.
After a brief spell at Wigan, Horsfield joined West Brom for £1m in December 2003. He enjoyed an excellent January, winning the First Division’s player of the month award, and his seven league goals were crucial in propelling Albion back to the top flight. Horsfield struggled to make much of an impact on his return to the Premier League, but he played a starring role in West Brom’s great escape on the final day of the season. He scored with his first touch as a substitute against Portsmouth and then made the winner for Kieran Richardson and described the day ‘as the best achievement of my career’. Horsfield also featured for Sheffield United, Leeds and Lincoln before becoming player-coach at Port Vale.
We wish Geoff all the very best in recovering from his illness.