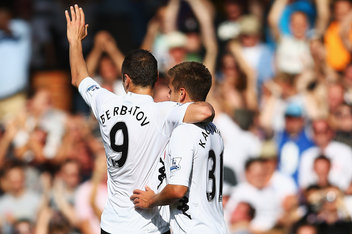 Alex Kacaniklic might have scored the winner at West Brom yesterday to end Fulham’s miserable run but he preferred to deflect any praise in the direction of the peerless Dimitar Berbatov afterwards.

The Swedish winger enjoyed a successful return to the Fulham starting line-up after missing Saturday’s defeat by Swansea through injury and hailed his Bulgarian team-mate’s vision and ability as the main reasons why the Whites were able to end their alarming slump.

Berbatov’s always good. He’s a class player. He’s definitely one of the best players in the league.

Not many are better than him. He’s a top player and wants things to be on the top level. He demands a lot to get the best out of every player, but for me, it’s fine.

He’s so comfortable and just keeps the ball. He’s been at a top club in England and an international too and we always learn every day from him in training and looking at him in games.