Why today’s not ‘a good time to play Arsenal’ 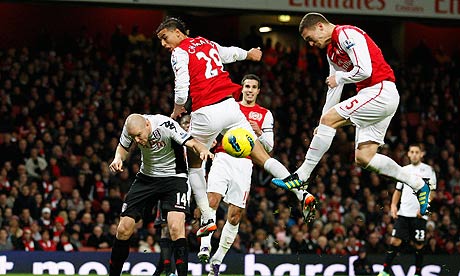 It started shortly after Arsenal surrended that two-goal lead in Gelsenkirchen on Tuesday night. Another Arsenal crisis, more woeful Wenger wailing and some of publicity-hungry members of the punditocracy pounded arguably Arsenal’s greatest every manager. Everybody knows that it’s been a while since the Gunners were aiming their fire at England’s elite – never mind the cream of the continent – but the belief suddenly coarsing through a few Fulham veins, as illustrated by the text messages I’ve received from some of my fellow travellers to north London this afternoon, makes me very nervous.

When good teams go through slumps, they usually pummel some poor opponents into submission. Fulham have played that role against some of the poorer sides in the Premier League, but they’ll need to be playing at a level we’ve not seen away from home since the tail end of last season to break their Arsenal hodoo. The Whites have never won at Arsenal in any competition – some 26 fixtures – and, although, the statistics look a little better since the red half of north London said an emotional goodbye to Highbury, it provides only the slightest crumb of comfort.

Furthermore, Martin Jol’s not beaten Arsene Wenger on his own patch. The Dutchman, who will be forever seen as a former Spurs manager in Arsenal eyes, probably never enjoyed anything Bobby Zamora did quite as much as the injury-time strike that tipped a tempesturous tie Fulham’s way last January. Fulham have only picked up four points in more than a century of visiting Arsenal: one of those was an outrageous heist overseen by Chris Coleman which owed an enormous debt to the goalkeeping of Edwin van der Sar and another was a far more expansive display when Roy Hodgson’s showed a little more elan that was usually offered away from home.

Last season’s point was the closest Fulham had come to heading back home with an overdue victory. It owed much to Jol’s persistence with Bryan Ruiz, whose encouraging hour and a bit showed there was plenty more to look forward to despite a spluttering start to his stint by the Thames, as well as an awkward Arsenal defence. They were prized upon by a Danny Murphy pass (the former Fulham skipper will be replaced by Dimitar Berbatov this afternoon as the object of the Emirates’ ire, I supect) and John Arne Riise’s cross was turned into his own net by Thomas Vermaelen. Only eight minutes remained when the Belgian burst forward from the back to make amends – heading home with aplomb.

The restlessness in the red half of Highbury and Islington is understandable after seven years without a trophy. You’d have got extraordinary odds on Fulham reaching a European final before Arsenal on the night the Gunners were shot down by two late Barcelona strikes in Paris in 2006. But after the insipid display at Old Trafford and the sloppy squandering of a strong position against Schalke in midweek, even a mild philosopher like Wenger will demand a response from his charges. What better way to banish the talk of their worst start under the Frenchman than with a stylish showing against their fellow Londoners who start the afternoon on the same number of points.

The tuteledge of Steve Bould was widely credited with shoring up a creaking defence earlier in the season, but in the aftermath of Old Trafford, it seems to have been forgotten that Arsenal have the best defensive record in the divsion. Only eight goals conceded suggests that when Wenger is able to select his strongest back five, the back door might be bolted firmly shut. The evidence of the past fortnight suggests that it probably shouldn’t include Andre Santos for any number of reasons.

Even without the suspended Jack Wilshere this afternoon, the Gunners have quality in forward areas that others could only marvel at. Lukas Poldoski’s problems acclimatising to the English game could be a thing of the past come five o’clock, such is the German’s talent. It would also be a brave man who bet against Oliver Giroud scoring Arsenal’s first league headed goal, such has been Fulham’s fraility in the air so far this season. Wenger could still call on Walcott’s searing pace and the answer to Arsenal’s lack of penetration in central areas might be to try the England international through the middle, which has often appeared his most natural position.

Chris Baird might be right to suggest the pressure’s all on Arsenal. But the hand of history only points to this fixture finishing in either in a creditable stalemate or enducing numbing disappointment. The hosts will be keen to assert their supremacy once again. Fulham had better be prepared to resist an early flurry at the Emirates this afternoon.