Sidwell ‘disappointed’ with a draw 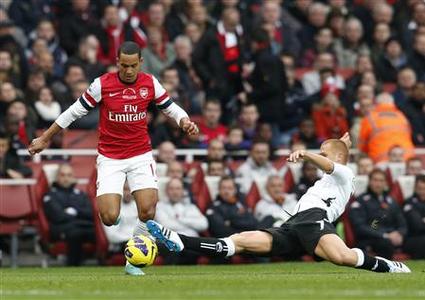 Steve Sidwell was disappointed that Fulham were unable to end record a historic first win at Arsenal after an extraordinary encounter at the Emirates Stadium this afternoon.

Martin Jol’s men trailed to goals from Oliver Giroud and Lukas Podolski inside 23 minutes but an Alex Kacaniklic header sandwiched between a Dimitar Berbatov brace incredibly saw the Cottagers come back to lead with a quarter of the game to play. Sidwell was himself perhaps fortunate to avoid a second yellow card for bringing down Santi Carzola in a dangerous position and, after Giroud’s second of the afternoon, the Whites were indebted to a superb penalty save from Mark Schwarzer that maintained parity right at the end of an absorbing afternoon.

Sidwell, who was a late inclusion against his old club after Mahamadou Diarra failed a fitness test, told the BBC:

We’re disappointed not to come away with three points, but it’s good to get a point away from home at the Emirates. I had a great upbringing and education at Arsenal, and it put me on the path to where I am now.

We found ourselves 2-0 down and felt hard done by. Then we got it back to 2-2 and were growing in confidence. We got a third goal but just couldn’t hang on. The gameplan was to get into them and don’t let them play.

We also had to defend well and keep a good shape, and we’ve done well today. We could maybe even have scored more, but it was hard work out there.