Progressing from ‘pretty’ to ‘purposeful’ 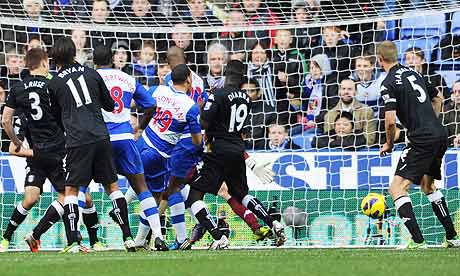 Writing about Fulham as regularly as this correspondent does, you sometimes find yourself in some strange situations. One such moment was being trapped in a central London lift with the senior football correspondent from a leading British broadsheet just as Martin Jol’s appointment as Mark Hughes successor broke. As the only two occupants of a lift which was supposed to be transporting us from a charity lunch towards the Tube, we’d already been chatting about Craven Cottage and the like, when his smartphone buzzed with the news. I’ll remember his words – and the big grin that accompanied them – for a while:

That’s a great appointment. Jol will promote some of Fulham’s young talent, transform the style of play to a more continental approach and make you an attractive side to watch at the Cottage. Plus professionally, I love him – he’s always good for a quote.

All three points seem spot on so far, especially the last one. You can see why Jol’s so popular with the scribes when he offers lines like these, an assessment of Fulham’s ultimately academic attacking play at the Madjeski Stadium last week:

In Holland, we’ve got a phrase with blonde girls. They look good from afar – but are far from good. We looked good, but without a purpose.

Whether Jol prefers brunettes isn’t really our concern – although Fulham’s finest performers at Reading were Bryan Ruiz and Dimitar Berbatov – but you can’t argue with his analogy. All the pretty patterns that the pair created in fashioning a winning position – twice – amounted to nothing after the sort of shoddy defending associated with struggling sides allowed the hosts’ to pinch a point. It’s all very well being eye-catching up front, but if it leaves holes that seasoned Premier League performers like John Arne Riise, Brede Hangeland, Aaron Hughes and Mark Schwarzer can’t close, then Fulham can kiss goodbye to kicking on from the steady mid-table position they’ve occupied with regularity recently.

There has been outdoubted progress under Jol. His willingness to blood young talent has seen first Kerim Frei and then Alex Kacaniklic explode onto the Premier League scene and his capture of Dimitar Berbatov and Mahamadou Diarra for next to nothing when compared to the big money that’s splashing around in the modern game should still be applauded. The prospect of a Diarra-Ruiz-Berbatov axis is simply mouthwatering. Fulham are far less predictable than in past seasons, because as Rich over at Craven Cottage Newsround has pointed out this week, our system is suddenly a lot more symmetrical.

With a more fluid, European system in place, stopping Jol’s side isn’t as simple as sticking two men on Danny Murphy any more. Ruiz will probably spend most of the season floating from a central position behind Berbatov, with Diarra drifting forward dangerously from deep. The Mali midfielder’s ball-carrying is under-rated and with Damien Duff’s devastating early season form now being seriously challenged by an exciting new arrival in Ashkan Dejagah, Jol is spoiled for choice in offensive areas. That’s before he considers whether Berbatov might need a partner – poor old Mladen Petric must be feeling a little hard done by, having to make do with a place on the bench after his scintillating start to life in English football.

The most pressing concern, though, will be how alarmingly open Fulham appear at times. Without a classical midfield destroyer in the mould of a Dickson Etuhu – and Jol came curiously close to lamenting his departure briefly yesterday – the Whites have been unable to close out games. Late lapses have cost Fulham five points in the last month and the concession of silly free-kicks in dangerous positions has been just as disturbing as some of the downright desperate defending that followed. Even in open play, the central midfielders have often been caught too high up the pitch, leaving a lack of protection for the back four behind them, something that’s even more dangerous when Jol has given John Arne Riise a license to roam along the left the flank.

Giving up silly goals might just be the consequence of a couple of tactical tweaks designed to offer some of Fulham’s seriously impressive attacking talent some more roam in which to operate. If so, it’s a simple fix. With Mahamadou Diarra now fully fit and Chris Baird proving more than a mere stopgap alongside him, the pair could provide some sterner steel in front of a defence that will have to do a bit more work than in the Hodgson era. And asking your key lieutenants to attack the ball as if the action was taking place in the opposing penalty area, might see a few of those nervy set-play situations pass without triggering more heart-stopping moments in the Fulham penalty area.

Jol’s team in still one in transition. His first season at Fulham went far better than Andre-Vilas Boas’ introduction to English football down the road, and the given the ease which with the Whites are now finding the net, you could construct a case to suggest that they might not miss Mousa Dembele or Clint Dempsey as much as we thought back in August. Equally, Fulham are looking far more potent on their travels – and picking up points as opposed to slumping to dire away defeats. But’s Jol’s a winner – you sense that draws don’t give the Dutchman as much contentedness as Hodgson, which may owe something to the latter’s Italian influences. You can be sure that he’ll want pretty to be followed by successful when we come to write our assessment of his time at Craven Cottage.