Jol: Fulham fortunate to escape with a point 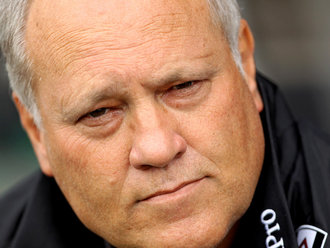 Martin Jol admitted Fulham were fortunate to escape with a point against Everton this afternoon after enduring a ‘bad day’ at Craven Cottage.

The Whites were outplayed for large periods of the game but drew 2-2 thanks to a combination of substitute Steve Sidwell’s late equaliser and some wasteful finishing by their visitors. The Fulham manager admitted that Everton might have scored at least double the number of goals they had to show for the 27 shots they rained down on Mark Schwarzer’s goal and was candid enough to concede that the casual observer wouldn’t conclude that his team could finish in the top ten based on this afternoon’s evidence:

You need a bit of luck and we certainly got that. Everton could have scored a third goal and a fourth goal, but we never gave up. To come away from a bad day like today with a point is great. If you saw us play in this game, we’d be happy to finish in the first ten this season.

The Dutchman did hail his side’s never-say-die attitude that saw them grab the late equaliser, however.

Everton dominated us, all we could do was try to be positive. But it doesn’t mean anything in football if you don’t score the goals.

They are a very good footballing team. They are a settled team and know exactly what to do. Normally we are a good team, but I couldn’t see that today.  The only positive thing I can say is that we never gave up.

The Dutchman was full of praise for Everton’s commitment to attacking football, comparing them to Barcelona during his post-match press conference:

Everton were stronger than us, they are a very good team and they pressed us and their full-backs were almost playing like Barcelona’s do.