From the boo boy to Bairdiniho 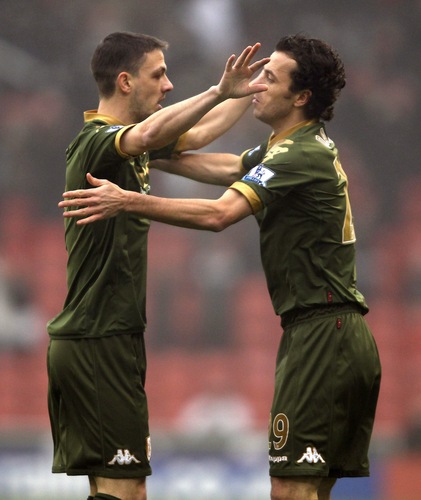 When Martin Jol was planning his second season in charge of Fulham, it is fair to say he wouldn’t have picked Chris Baird as his first choice central midfielder. Indeed, Baird probably wouldn’t have made the first eleven and there were whispers that he might move on in search of first team football. Like life, in football, time changes everything. Hours after the transfer deadline day, Fulham were short of central midfielders and Baird stepped into that role he plays with such distinction for Northern Ireland at short notice. The untimely injury to Mahamadou Diarra and the departure of Mousa Dembele meant that Baird might well be more than a stopgap for the Whites. In my opinion, there’s nobody who deserves a run in the side more.

Baird grew up in Rasharkin, in County Antrim, where his brothers played gaelic football and hurling, but Baird preferred to play football and after starting his career at Ballymena United, Baird signed for Southampton in 1998 after a successful trial with the south coast side. Gordon Strachan gave a young Baird his senior debut as a late substitute against Aston Villa in April 2003 and introduced again towards the end of a heavy defeat at Arsenal, but it was still a major surprise when Strachan started Baird at right back for the FA Cup final against the Gunners later that May. Although Southampton lost 1-0, Baird was impressive on his full debut and his progress was rewarded with a first call-up to the Northern Ireland senior squad, with his first cap following in Italy the following month. Baird was a regular for his country throughout the following season, which he largely spent on loan at Walsall and Watford, making a return to the Saints starting eleven for the final fixture of the campaign against Charlton.

Despite being a regular member of the Northern Ireland side, Baird struggled to get much of a look in once Harry Redknapp succeeded Strachan. He didn’t make a single first-team appearance in 2004-05 and was a forgotten man until Redknapp departed in December 2005. He made seventeen appearances under George Burley as the Saints adjusted to life in the First Division and when he was offered the chance to a stake a claim for a first-team spot in his natural central defensive position at the start of the 2006-07 camapign, Baird began to fulfil the potential that saw Strachan select him for that Cup final. He missed only two games all season, captaining the Saints to a sixth-place finish, scored his first three goals for the club, and his consistency saw Baird win the Player of the Award at the end of the campaign.

Baird’s impressive performances attracted interest from several top flight sides and Sunderland and Fulham were locked in a battle for his services for much of the following summer. Baird’s relationship with his former national team boss Lawrie Sanchez, who had then been installed as the permanent manager at Craven Cottage, proved criticial in persuading him to make the journey to London although Sunderland boss Roy Keane wasn’t amused:

We have had a player this summer who didn’t even ring us back because his wife wanted to move to London. He didn’t even have the courtesy to pick the phone up to us. And shopping was mentioned. It might astonish many people, but it is true.

The fiery former Republic of Ireland midfielder’s rant made for good copy but it was surprised many who knew Baird personally. The truth was somewhat more prosaic. Baird’s wife and daughter were born and raised in Southampton and, as a family man, he preferred to relocate to London rather than Sunderland, with the capital closer to the south coast. Whilst Fulham’s link to Harrods, then owned by the Cottagers’ chairman, offered a plausible explanation if people bought into the celebrity and WAG culture that surrounds football but Baird’s answer is pretty emphatic:

Harrods? I don’t think we have been there once. We’re not mad on shopping. We live with what we have got and that is enough for me.

In the tough early months at the Cottage, Baird and his family would have been forgiven for thinking they’d made the wrong decision. Sanchez, recalling Baird’s unstinting service to the Northern Ireland side he turned into a team that embarassed England and Spain amongst others, picked him at right back but, with Fulham’s more vitrolic supporters vilifying his side, it was a happy start to life by the Thames for Baird. He struggled against quick top flight wingers, being sent off at Aston Villa for two yellow cards, and when Sanchez’s reign came to an end with Fulham in the relegation zone just before Christmas and Roy Hodgson’s rescue mission saw him left out of the first-team picture, it seemed as though his days at Motspur Park might be numbered.

The new manager used him sparingly during the Great Escape, preferring new loan signing Paul Stalteri at right back, although he entered Fulham folklore after punching Jimmy Bullard in training after tiring of the shaggy-haired midfielder’s jibes. The pair made up and Baird was the first to celebrate with Bullard when he marked his return to the first-team with an stoppage-time free-kick that clinched a crucial win over Villa, but given the constrast in the duo’s careers since Bullard joined Hull in a big-money deal the following January, it could be argued that the Ballymena boys sized up Bullard’s boorishness well before many Cottage regulars.

Baird bought into Hodgson’s methods – encouraged by the manager and his coaching staff to keep going – and although he had to wait for his opportunity, despite an outstanding performance at full back in the 1-0 win over Arsenal in August 2008, he took his chance with both feet when it arrived in the unlikely form of a spell in central midfield after Hodgson had to rejig his side after injures to Danny Murphy and Jonathan Greening and the continuation of Fulham’s Europa League campaign meant he was short of midfielders. Baird was outstanding in central midfield as Bullard returned to the Cottage with Hull – and appeared as a late substitute in a 2-0 Fulham win – and his reading of the game, tenacity and exceptional range of passing made him the obvious choice to continue in that position with Hodgson short of alternatives.

He stepped in and starred, making Bobby Zamora’s opener at Burnley in December with a superbly quickly taken free-kick at Turf Moor in December and retained his place for the best of three months, with his combative and quiet efficiency one of the main reasons why the Whites were able to overturn that seemingly impregnable 4-1 aggregate deficit against Juventus in the Europa League second round. He made thirteen appearances in that European run and then, as now, was one of the unsung heroes of a successful side. Baird’s versatility – he stepped in the following Christmas at left back for Carlos Salcido under Mark Hughes and lashed in the two goals in quick succession at Stoke that probably saved the Welshman’s job – has meant he has never really been able to hold down a regular position and had to settle for life as Fulham’s red addair.

It is something that suits the modest man well. He’ll get a rousing reception at St. Mary’s tomorrow from both sets of supporters but Baird’s focus will be winning once the whistle blows, especially as he’s likely to be in direct opposition to his compatriot and former Fulham team-mate Steven Davis. Baird won’t shirk a challenge and his professionalism has never been in doubt, particularly after the dignified manner in which he dealt with his mum’s home being firebombed by loyalist paramilitaries a couple of years ago, and the Fulham fans are now pretty chuffed to the man we’ve nicknamed ‘Bairdiniho’ running the show.