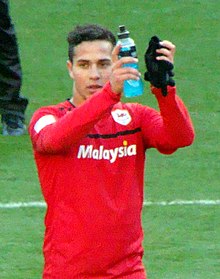 Kerim Frei has settled in well on loan at Cardiff City and, after a brief debut as a substitute on Saturday, believes the Bluebirds should be able to maintain a genuine promotion push this season and have all the hallmarks of a side that could stay in the top flight if they manage to go up from the Championship.

The teenage Turkish midfielder, who joined the Welsh side on a month’s loan from Fulham on Friday, made his first appearance for Cardiff as a late substitute in their 4-0 win over Burnley and is already comfortable at the club. The 18 year-old, whose untimely injury whilst on international duty with the Turkish under-21 side has seen him slip down Martin Jol’s pecking order despite an impressive introduction to the Premier League last term, is looking forward to regaining his match sharpness under Malky Mackay.

Straight away I can see what a good side Cardiff are. You only have to look at some of the players here. It’s a very professional club and everyone has been really helpful and will go out of their way to do something for you. I already feel very settled.

On the pitch, Cardiff want to play football and that is great. That is what is important in the Premier League. We want to score goals and you could see that against Burnley. Cardiff are top of the league now and they definitely have the quality to go up and when they do, in my opinion, they will stay there.

Frei is relishing the opportunity to continue his development on loan having made 25 appearances during his first season in the Fulham first team picture last year.

I came here to play football and I’m hoping that’s what will happen. I had about 10 minutes against Burnley and I had a couple of nice moments. I hope maybe the Cardiff supporters saw a little bit of what I am about. I really want to enjoy my time with Cardiff and I think I am going to do that.