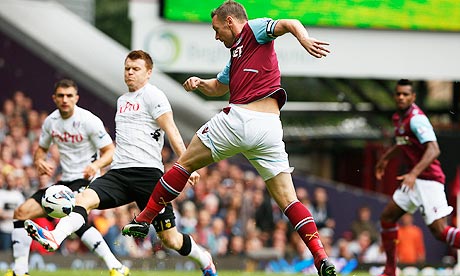 I always enjoy my trips to West Ham. There’s a historical bond between the clubs that stretches beyond Bobby Moore and 1975 to the likes of Leroy Rosenior and, even more recently, Andy Melville and Luis Boa Morte. More than that, though, the Hammers are a reminder of what football used to be like: a proper club that hasn’t forgotten its roots at the heart of London’s East End and embodies the blueprint that Trevor Brooking is now trying implement across the country for the Football Association after his education at the Boleyn Ground.

Unfortunately, Fulham are far too accommodating almost every time the Whites make the short trip down the District Line. Just as we’ve become accustomed to wretched away showings in the top flight these days, I’m probably a bit too blase about Fulham’s appalling record at Upton Park. Statistically speaking, West Ham are the side who average more points against us than any other since Jean Tigana guided Fulham back to English football’s elite at the turn of the millennium. Furthermore, we’ve mustered just two paltry wins at West Ham in that time – one was on our very first Premier League visit in 2001 and the other was a surprise FA Cup replay success, sparked by a wondergoal from Brian McBride, that perked up a hospitalised Chris Coleman four years later. But, for the most part, our performances at West Ham have been gallant failures or gutsy draws: like the late point secured by Phillipe Christanval after Vincenzo Montella made his debut from the bench. The memory of Junior Stanislas’ speculative injury-time effort taking a hefty deflection off Aaron Hughes and wrong-footing Mark Schwarzer just as we dared to dream that Roy Hodgson’s ten man might break the West Ham hoodoo in 2009 still lingers in the back of my brain.

As I wrote yesterday in the lead-up to the first London derby of the campaign, setting the right tone early was crucial. Sam Allardyce wrote in the programme yesterday about the atmosphere and frenzied pace of a meeting between two sides from the capital – this was the first of ten such clashes this season for both sides – and the Hammers’ boss will have identified this as a home banker in his quest to garner enough points to keep the Hammers well clear of the dreaded drop zone. On yesterday’s performance, the Irons look more like top ten contenders – but that might have had a fair bit to do with West Ham’s desire to respond immediately to their forgettable South Wales sojourn as well as Fulham’s generous defending.

Going behind to the fastest goal of the season might not have been in Martin Jol’s plans, but you know he would have seen it coming. Andy Carroll, who cantered around like a carefree schoolboy let out of lessons early in the warm-up, looked like a man instantaneously free of the pressure created by that hefty £35m price tag placed around his shoulders when Liverpool opted for him to replace Fernando Torres. When a manager and his team-mates believe in him and the side is constructed to his strengths, as he showed for the Anfield outfit at the tail end of last season and during his commanding display for Roy Hodgson’s England against Sweden this summer, Carroll is almost irresistible. The fact that his great mate Kevin Nolan is his captain again at West Ham probably helped clinch a loan move the old-fashioned number nine needed to reignite his career – and it was almost scripted that the pair would combine for the opening goal.

That Fulham conceded from the first high ball they had to deal with set the tone for the afternoon. Allardyce’s plans all came to fruition. Carroll, given the chance to contest a hopeful header from the back with a run at a static Brede Hangeland, soared high and flicked the ball beyond the Norwegian centre half. That allowed Ricardo Vaz Te, so lethal during West Ham’s promotion season last year, to saunter into the box beyond Aaron Hughes and his clever flick caught Sasha Riether out of position and Nolan arrived to send a first-time volley across Mark Schwarzer from twelve yards. 57 seconds was it all took – it was simply too straightforward.

Where West Ham were on the front foot and rampaging forward at will, Fulham were fitful. When the Whites did have possession (and they enjoyed slightly more of the ball than their hosts overall) they frequently squandered it and Mladen Petric was so starved of service that it seemed slightly harsh to withdraw him at half time. The visitors certainly didn’t make enough of Joey O’Brien’s presence as a makeshift left back: twice in the first twenty minutes, Damien Duff beat him with ease but Fulham to give the intelligent Irish winger the ball enough to exploit that weakness.

Instead, the only weaknesses were at the heart of a usually impregnable Fulham defence. The second goal was so sloppily conceded from a set-piece it left me – never mind Jol and his coaching staff – seething with rage. Fulham failed to screen the near post sufficently, Schwarzer should have been more decisive in his six-yard box to connect with Matt Taylor’s inswinging corner and a man of Winston Reid’s aerial ability was given far too much freedom to bend his run and power a header into the centre of the goal.

Coming back from 2-0 down is difficult but not impossible, especially when you consider that Jol had a fair bit of attacking talent to introduce from the bench. The third goal was perhaps the most frustrating of the lot. Mahamadou Diarra might have had a case for being impeded by Andy Carroll at this set-play but a man who has graced the Champions’ League with distinction and made all those appearances for Real Madrid should simply be stronger in that situation in front of a burly centre forward. Hangeland’s header away was clumsy but Fulham failed to close down Taylor from the sort of range where he’s been a menace for years – and paid the penalty.

There was a lot of opprobrium in the away end by this point and poor old Kieran Richardson, once a West Ham youngster, was the target of much of it. This was unfair. Richardson’s an excellent footballer, quietly efficient in midfield, and showed enough ambition to muster Fulham’s first shot on target, which really extended Jaaskelainen down to his left. Given that the versatile midfielder, good enough to be considered worth a serious run in Sven-Goran Eriksson’s England side when he broke through at Old Trafford, had hardly trained with his new team-mates after concluding a late switch from Sunderland yesterday, it was a big call to put him in central midfield alongside Steve Sidwell. Richardson, a willing worker and technically sound, will be far better than what he showed yesterday afternoon and is a real bargain at around £2m.

Fulham were far better in the second half once Dimitar Berbatov was introduced, although West Ham were in cruising mode by this point. The Bulgarian looked eager to make an impression, almost as if he was aggrieved to have to sit through the abject first forty five minutes (you weren’t the only one, Dimitar). His first touch was as resplendent as we remember and there were all the clever flicks and tricks to bring his team-mates into play. It was all a little academic but in a single half of football, Berbatov made five chances and that makes him our second most creative player of the season.

Whilst the defending was abject and the defeat proved a painful reminder of why anything more than mid-table is far too ambitious before Jol manages to cure Fulham’s chronic away form, there’s enough to suggest that the Whites won’t struggle for creativity going forward post-Dempsey and Dembele. Anyone suggesting that the Whites looked devoid of dynamism yesterday is right, of course, but should remember that Bryan Ruiz was ruled out with a hamstring injury. The Costa Rican has looked superb behind a lone striker after completing a full pre-season and Berbatov’s arrival will mean that Mladen Petric might have to play out wide. That creates competition for places and I felt Alex Kacaniklic was unfortunate to dropped after his fine start plus there’s Kerim Frei to return from injury.

We might have been well beaten at the Boleyn Ground – but that’s not unusual. In 1968, a side containing George Cohen as well as the late Johnny Haynes and Sir Bobby Robson were battered 7-2. Most Fulham fans would have taken three points from the first three games, considering that they included trips to Manchester United and West Ham. The season’s not decided in September, although Jol will be wanting his new-look side to set the record straight against West Brom after the international break.