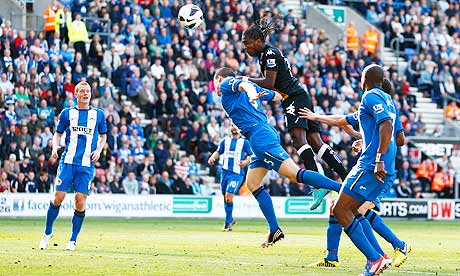 It was almost as if a shy and modest Hugo Rodallega didn’t realise what he’d done. With one flick of his dashing dreadlocks, the Colombian forward scored his first goal in eight months on his return to Wigan Athletic and set his new employers on course for a rare – and important – away win. Rodallega refused to celebrate his goal on the pitch after his four fruitful years with the Latics and was similarly unmoved when hundreds of delirious Fulham fans sernaded their new signing, to the strains of the Proclaimers, upon his low-key arrival at Wigan North Western station. Happy to pose for pictures and sign autographs both on the platform and the train, the 27 year-old has quickly become a cult hero.

There was some doubt about he would make Martin Jol’s starting line-up on his return to Lancashire, with Bryan Ruiz and Mladen Petric both available after injury, but the Fulham boss was convinced that ‘Rodallega would do something nice’. Jol’s conviction was proved right just after the half hour when the lone striker leapt to power Dimitar Berbatov’s floated cross past Ali Al-Habsi. It was a goal Fulham badly needed as for all the excellent interplay between the new lone striker and Berbatov, described as ‘the perfect number ten’ by his manager afterwards, the most memorable moment of the preceeding thirty minutes came when referee Lee Probert was floored by the combined force of a fierce 50-50 between Ben Watson and Steve Sidwell and self-effacingly showed himself a red card.

Roberto Martinez, who hoped his side could recover from their harsh hammering at Old Trafford last weekend in front of their own fans, felt his side were ‘naive’ and was disappointed that the game was far too open. Wigan certainly started in the best possible fashion, with Mark Schwarzer called into action to field an early sighter from Aroune Kone. Had the Ivorian striker been slightly more clinical before lashing home an injury-time consolation, the afternoon might have taken an entirely different course. The August arrival from Sevilla should have levelled the contest when released by a cute James McCarthy pass but Schwarzer swept from his line and smothered the danger. Wigan also hit the woodwork just before the break through Jordi Gomez’s rising drive and Emmerson Boyce’s reaction suggested he felt he should have headed a Maynor Figueroa past the Fulham goalkeeper rather than wide of the far post.

Although the hosts dominated possession, Fulham fashioned plenty of chances of their own. Far more fluid and ambitious in forward areas then under either Roy Hodgsaon and Mark Hughes, the movement of Berbatov, Duff and Kacaniklic caused plenty of problems for the Latics back three. Al-Habsi made a fine sprawling save from Berbatov’s low drive and Kacaniklic fizzed a shot over the crossbar from the left angle of the box, while Jean Beausejour did brilliantly to hook Chris Baird’s effort clear from underneath his own crossbar.

Wigan went in search of an equaliser after the break and only the offside flag denied them a leveller when Gomez was adjudged to have been caught as Fulham stepped up before he cut the ball back for McCarthy inside the six-yard box. The Latics only had themselves to blame just before the hour when Gomez somehow stabbed wide after Schwarzer had parried a speculative Mauro Boselli strike – and the Spaniard’s glaring miss was to prove costly as Jol’s side broke quickly to seal the contest.

The crucial second owed much to the persistence of Ruiz, who jinked his way to the edge of the box after receiving an inviting inside ball from Rodallega, and refused to allow Gary Caldwell to rob him of possession. The Costa Rican’s strength forced the ball out to the onrushing Damien Duff, who fired his third goal of a fine season across Al-Habsi and celebrated with the delirious travelling support. Martinez threw up on Callum McManaman and Arsenal loanee  Ryo Miyaichi for the final thirteen minutes and both had an immediate impact. The Japanese winger’s deep cross could have floated inside the far post were it not for Schwarzer’s sharp reflexes and McManaman, showing the confidence that flows from a series of strong performances for Wigan’s U21 side, made the Wigan goal when his half-volley bounced around into the Fulham box and was converted by Kone.

There followed two and a half minutes of concerted Wigan pressure – with Al-Habsi even venturing forward at the death for a corner – but Fulham hung on for three precious points that lifted Jol’s side into the top four of the early Premier League table. It’s certainly some turnaround from the Dutchman’s start at Craven Cottage, when his side failed to win any of his first six league fixtures, and this result was even more impressive given that it was achieved without the power of Mahmadou Diarra in midfield.