Hughes signs on for another year at Fulham 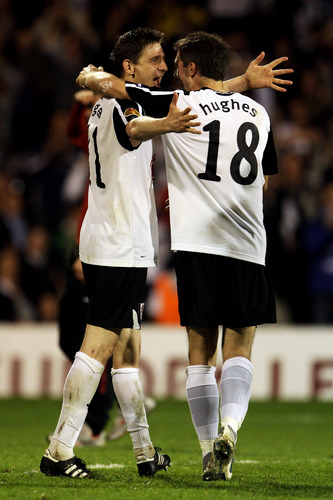 The way in which Fulham slipped out the news that Aaron Hughes has signed a contract extension to keep him at Craven Cottage just after five o’clock last night rather neatly encapsulated the quiet way in which the no-frills Northern Irish defender has gone about his football career.

Hughes, now 32 and back in the ranks with the ‘Green and White Army’ after eight years captaining his country, is one of the unsung heroes of a Fulham side that’s noticeably shorter on star names these days. The former Newcastle and Aston Villa defender, who made his senior debut at the Camp Nou of all places in November 1997, has developed an almost telepathic understanding with Brede Hanglenad – something which was crucial in shoring up a suspect defence as the Whites miraculously escaped relegation in 2008 – and his reading of the game remains second to none.

When Martin Jol replaced Mark Hughes last season, it initially appeared as though Hughes’ versatility would count against him. The Cookstown native was happy to play at full back, as he has done without complaint for club and country throughout his career, to accomodate Philippe Senderos at the heart of the Fulham back four. Even though Senderos has surprised many with his assured performances over the past season and a half, the Hughes-Hangeland partnership took Fulham from the near foot of the Premier League to a Eur0pean final and things look far more assured when they are together at the back.

Hughes, the antidote of the modern celebrity footballer, sounded modest and rather bashful when discussing the new deal.

I am obviously delighted as I have enjoyed my time here so far and to know that I’ll be around for another couple of years is a nice thing for me. I’ve had a lot of good experiences so far and hopefully I’ll have more between  now and 2014.

There’s absolutely no reason, given the longevity of elite footballers’ careers these days, why Hughes shouldn’t be part of the Fulham defence beyond that date too.