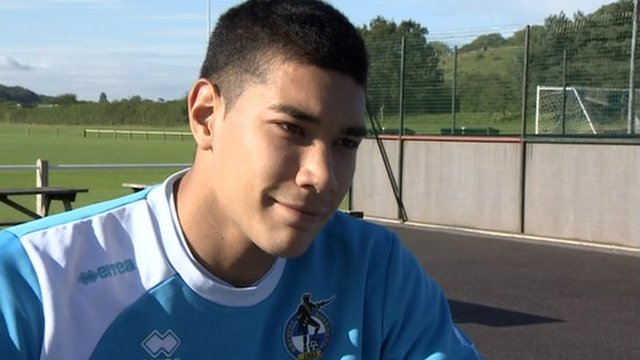 Etheridge will be hopeful of regular football at Bristol Rovers

A good profile on Fulham third choice goalkeeper and Philippine sensation by the BBC following his loan move to Bristol Rovers. He has already played, keeping a clean sheet last weekend, and is expected to feature again tomorrow for his temporary club. Meanwhile Dan Burn is the second Fulham youngster to go out on loan in a week, joining Gary Johnson, self-confessed Fulham fan, at Yeovil.

Neil Etheridge’s journey from Manila to the Memorial Stadium

Bristol Rovers’ loan signing of Fulham goalkeeper Neil Etheridge earlier this month may have slipped under a lot of people’s radars but he is, by his own admission, kind of a big deal.

At the tender age of 22, Etheridge has 37 international caps for the Philippines, a contract with a Premier League club, 100,000 followers on Twitter and an army of female fans – thanks to his ventures in the world of underwear modelling.

And all of this despite the fact he only made his professional league debut last weekend.

He has even been held in the same esteem as boxer-come-actor-come-politician, and national hero, Manny Pacquiao.

“The Philippines is a very passionate country,” he told BBC West Sport. “With me playing over here in England they see me as a big deal.

“But there are bigger stars than me. Manny is the biggest star.”

Yet Filipino football’s poster boy has gone relatively unnoticed in the English game.

A graduate of Chelsea’s academy set-up, London-born Etheridge has been an understudy to Mark Schwarzer at Craven Cottage for the past two seasons and until his arrival at the Memorial Stadium, his only league games were with non-league minnows Leatherhead.

He was playing for England schoolboys when he was asked to switch allegiances to the Philippines – for whom he qualifies through his mother – and had never kicked a football for Fulham’s first team.

He has gone on to claim the number one shirt, and played an integral part in one of their biggest adventures – in the South East Asian Cup in 2010.

“We weren’t even meant to qualify, but we did, and we were drawn in the hardest group against the highest-ranked teams [Vietnam and Singapore],” he said.

“We beat them both and went through to the semi-finals. We lost to Indonesia over two legs but both games were played away because we didn’t have the facilities.

“People will think it was a strange decision to make at such a young age but I’ve loved every moment of playing for them.

“I want to take football forward over there.”

It seems a bold statement for such a young player, but his pop star-like fame has helped raise the game’s profile in his mother’s homeland.

“Basketball is the number one sport and football is quite far behind,” he said.

“But the funding is slowly coming in and there’s a lot of hard work going on to try and push football.

“I’m trying to be an ambassador over here and over there. I’ve been called that a few times. It doesn’t put any pressure on me and, in fact, it gives me confidence.”

And although confidence is something which oozes from the young keeper, he admits to being apprehensive about making his Football League debut, which came in Rovers’ uneventful 0-0 draw with Fleetwood, in front of a humbling 5,000 fans.

“It’s kind of crazy what I’ve done before but I was still nervous for my first game,” he said.

“You try to blank it out and try and get on with the job in hand.

“There were nerves there but they seemed to calm down once I stepped on the pitch. It was a good result for us and hopefully I can carry on in the right direction.”

His image is as famous as his ability between the sticks in some parts of the world, and Etheridge is happy to continue living his life in the spotlight.

“Modelling isn’t really my forte,” he says, coyly. “But I like endorsing products – it comes with the sport.

“It puts me in a good light as well. The people I work with help people in the Philippines as well, so it’s not just for myself, it’s for others as well.”