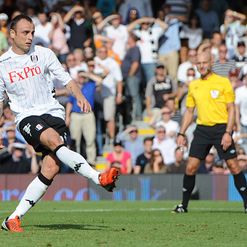 Dimitar Berbatov admits he couldn’t have dreamed of a better home debut than the one he enjoyed for Fulham this afternoon.

The Bulgarian forward, who made his first Fulham appearance as a half-time substitute in the forgettable defeat at West Ham two weeks ago, scored twice on his first start for his new club after his deadline day departure from Manchester United. Berbatov’s first-half brace helped the Whites record an important victory over ten-man West Brom after three successive defeats had rather diminished their bright start to the new season.

It was a great home debut. I had a feeling before the game that it would be a good day for the team and me. And it’s a great feeling. I feel satisfied with the result and my play, and all the supporters are happy as well.

It was my first performance at home and I felt good because I was on the pitch playing. When I’m happy great things happen, like today. I scored and played with a smile on my face. Most important for me is playing every game and when I can do that I give my best performances.

Berbatov opened the scoring with a sumptuous curler after a fine run and pass from Swedish starlet Alex Kacaniklic and then doubled Fulham’s lead with a penalty shortly before half time when Kacaniklic was fouled by Billy Jones.