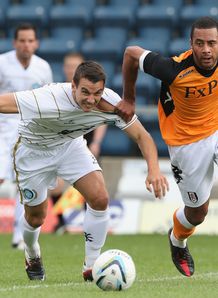 Fulham continued their impressive preparations for the new season with a comfortable win at Wycombe Wanderers this afternoon – and the margin of victory could have been even greater were it not for the sharp reflexes of Nikki Bull who kept the League Two side in the contest for much of the second half.

This was Wycombe’s first home game since their supporters’ trust had successfully completed their takeover of the club from Steve Hayes but none of Gary Waddock’s six summer signings had much of a chance to shine as Fulham’s courtesy extended only to naming a very strong first eleven. On this very day a year ago, Martin Jol’s side secured a battling draw away at RNK Split in the third qualifying round of the Europa League, in what was already their fifth fixture of a frantic summer. This term, Fulham have benefited from the more mundane pre-season pace, with a short tour of Germany designed to deliver peak fitness by mid-August and the signs are promising.

Mladen Petric, a clever close-season capture from Hamburg, looks ideally suited to the loan striker role vacated by Pavel Pogrebnyak, especially after scoring his four summer strike in as many matches. The 31 year-old needed just a single sighter, which he created for himself after Grant Basey had dawdled in possession, before opening the scoring eighteen minutes in. The Croatian collected possession twenty yards from goal in a central position and bent a brilliant effort around a beaten Bull and into the far corner.

Wycombe’s leaky defence had doomed their fight against relegation – spearheaded for a while by Marcello Trotta, who returned to Adams Park as a late substitute today – last term and there were signs that they might have been overwhelmed by their top flight visitors. Only a superb saving tackle from Basey prevented Petric from reaching a raking through ball from Bryan Ruiz and new skipper Garry Doherty bravely blocked a powerful blast from Moussa Dembele. Just before the break some excellent approach play between the Belgian and Petric, who also went close with a free-kick, almost presented a second to Mesca Na Bangna but the pacy winger lifted his finish over the crossbar.

The sum total of Wycombe’s first half efforts was a rising drive from midfielder Stuart Lewis, who signed his first professional contract with Martin Jol at Tottenham, and, although the hosts were more competitive after the break, they never unduly troubled Mark Schwarzer. Matthew Spring, who made his first appearance in professional football alongside the man who now manages him for Luton back in September 1997, wasted a decent shooting opportunity when John Arne Riise’s clearing header fell at his feet but Fulham were largely on the front foot.

Ruiz, making his first start since injury curtailed his season last March, was increasingly becoming more influential operating behind Petric. The Costa Rican’s cultured pass sent Mesca marauding through on goal but Bull stood up well and then the ex-QPR and Hayes custodian did brilliantly to tip over a well-disguised lob from Ruiz as he was desperately backpeddling. Bull then fisted away a venomous drive from Mahamadou Diarra, but it appeared only a matter of time before the Premier League side clinched the contest with a second. It came from Ruiz’s magical left foot, when curled a superb set-piece beyond Bull’s reach from 25 yards, and the energetic Sascha Riechter marked another outstanding display, characterised by energetic overlapping down the right, with a low cross that was gleefully tucked away by the returning Steve Sidwell two minutes later.

It was little more than a pleasing summer stroll for Fulham and judging where Jol’s side are in top flight terms is difficult on the evidence of a half-pace friendly against a side three divisions down the pyramid. But the manager and his coaching staff will have been pleased by the professional nature of their team’s performance, especially with a trip to Nice to come at the weekend.