The younger Moussa Dembele in action for PSG's youth side

I got an excited phone call over the weekend from my friend Claire, who sits in the Riverside, which went something like this:

Claire: Hello, Dan, I’ve got fantastic news that’s going to have you doing a lap round the office in delight …
Dan: Really? I’d like to hear this.
Claire: Moussa Dembele’s signed a new three-year contract. It’s on the internet in France.
Dan: Wow. That’s fantastic.
Claire: I know. So pleased we’re managed to hold onto him.
Dan: Have the club announced it yet?
Claire: I don’t know. I’ve just seen it on some Paris-based football website.

This is the point at which I started to get a little wary. Of course, it turned out that our Belgian playmaker hadn’t penned a new deal, but that we’d signed his namesake a highly-rated sixteen year-old striker from Paris Saint-Germain. Once the initial disappointment that Dembele senior hadn’t committed his long-term future to the club, I began to get excited about the forward eight years his junior. One of the stars of the French under-16 side, he has scored three goals in sixteen appearances and the fact that he has chosen to continue his development at Motspur Park is a major coup for Fulham and another indication that the revamp of our transfer strategy, investing in the next generation as well as our current Academy, is working.

Of course, it’s not like Fulham don’t have form for this. The last time we signed a largely unheralded foreign striker we wheeled out someone who was almost his namesake to celebrate the deal on the pitch when we were in exile at Loftus Road. That evening John Collins (pictured on the right here shortly after teaming up with his mentor Jean Tigana), a superb footballer and an even more impressive individual who strikes me as being wasted in a television studio given the promising start to his managerial career, introduced Collins John (shown left, scoring that wonderful goal at the Riverside Stadium). It might have been a bit of a laugh, but it stuck in the mind – as does the Dutch striker’s criminal waste of some special talent. Let’s hope the Parisian Dembele has a far better attitude than the youngster who seemed to have the world at his feet after coming from war-torn Liberia and enjoying a fairy-tale start to life in the top flight. The lesson of not taking the glory of professional football should come with a Collins John case study.

There were the Danish international team-mates Claus (pictured celebrating a Fulham goal, right) and Niclas Jensen, who played for Chris Coleman’s side at the same time having been team-mates at Lyngby in the mid-90s but were unrelated. Both have been unfairly maligned. Claus, a ball playing midfielder of real quality, couldn’t revive his career and was beset by injury problems. When he was on the field, Fulham looked a far better side and his vision created rare sights of goal for a side that was struggling to score with any regularity. Similarly, Niclas wasn’t absolutely hopeless full-back that he has been remembered as.

Jensen’s performance during England’s 4-1 humbling in 2005 illustrated why Coleman felt he was such a steal on a free transfer. There’s absolutely no way that you’d win 62 caps for your country and represent Denmark at two major tournaments if you’re useless. He struggled to regain form and fitness after being replaced by Wayne Bridge and acting on an ‘play or I’ll drop you’ ultimatum from national coach Morten Olsen, he quickly moved ‘home’ to FC Copenhagen. After a couple more seasons in Denmark, Jensen (pictured left during his Fulham career) retired and embarked on a career as a football agent. He now represents some of the brightest young Scandinavian talent from his Danish base. There was a time during the Coleman/Sanchez period where we seemed to have a fetish for anybody called Davi(e)s. Sean will always have a special place in Fulham’s history as the only player to have played at all four levels of the professional pyramid for the club – as well as those goals against Blackburn and Sheffield Wednesday – even if his career did seem to hurtle off the rails once he left the Cottage. Steve Davis never really got the chance to show the skills that Sanchez had cultivated as Northern Ireland boss (what with the ball being regularly launched well over the midfield in a desperate attempt to reach the ‘positions of maximum opportunity’) but went on to be a terrific asset to a now hastily-disassembled Rangers’ side. As a result of the Ibrox turmoil, the former Aston Villa midfielder will be lining up for newly-promoted Southampton against us.

Finally, Simon Davies occupies a special place in Fulham folklore. The undoubted star of the 2007/08 season scored five league goals and was the one constant in a struggling side beset by injuries, the Welshman’s versatility saw him played from the left of midfield in an early indication that Roy Hodgson liked inverted wingers. He scored the vital equaliser against Aston Villa before Jimmy Bullard’s last-gasp winner and created both the goals in that win at Reading that restored some belief. The first with a low cross that found Brian McBride and Erik Nevland’s injury-time clincher came after a one-two with Davies sent the winger scampering through the centre before the Norwegian kept his composure to convert an inviting pass. 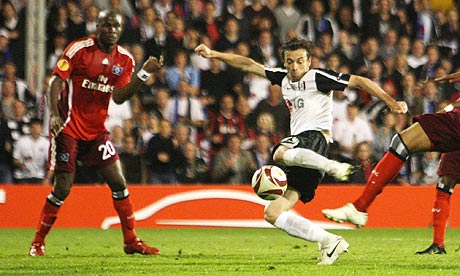 As a taxi driver - who didn't know I was a Fulham fan - said to me six months ago, 'If Messi had scored that goal, everyone would still be talking it now'.

His terrific equaliser against Hamburg, a feat full of technical class and physical bravery after an exceptional spot by Danny Murphy, doesn’t need retelling. That was his first European goal and he doubled his tally in the final with a nerveless volley just when Fulham needed a break. Frustrated by malleolar problems in recent seasons, Davies could remain a key part of Fulham’s jigsaw. Martin Jol used him as a central midfielder on his brief return to first-team action at Swansea last December and he has all the qualities to be a Murphy-like replacement if the manager wants a bit more pace to break the lines out wide. Whatever his Fulham career holds, Simon certainly won’t be forgotten.

People often ask, ‘what’s in a name?’ Plenty, of course. It can identify someone correctly, although not always at Craven Cottage. Let’s home the younger Dembele comes close to matching Moussa’s magical feet in a few years time. Here’s some footage of his fine display against Kashima Antlers from February to whet the appetite: