Unexpected goodbyes are the hardest ones. When you have to say farewell fairly swiftly, it can be difficult to find the words that truly express how much you’ll miss the departing individual. The news this morning that Danny Murphy was heading north to complete a medical at Blackburn Rovers ahead of an prospective free transfer didn’t surprise me – as there had been some doubt as to whether Fulham’s captain would remain at the club beyond his current contract for much of last season – but the finality of it left this correspondent feeling a little numb.

For all that you try and take the emotion of football, we have an emotional attachment to the teams to we follow. We all have our favourite players, who unfortunately in this era of big money contracts might not be as committed to their clubs as their predecessors were when there was a maximum wage. More than anybody over the past five years, Murphy epitomised Fulham’s rapid revitalisation. When he was signed at almost the midnight hour of the August transfer window during Laurie Sanchez’s desperate attempt to overhaul a stale squad, people questioned what Fulham might want with a 30 year-old whose best times seemed behind him.

Those nagging doubts persisted for much of a season that seemed destined to spell the end of Fulham’s brief return to the top flight, especially during the first four months of Murphy’s time at Craven Cottage when Sanchez’s direct football bypassed the talents of both his new signing and those of another summer acquisition, Steven Davis, in central midfield. Plenty of Fulham fans suggested that those eye-catching displays for Liverpool and England were a thing of the past – Murphy’s ‘legs were gone’ and that was a luxury a side waging a war against the drop couldn’t afford. They couldn’t have been more wrong.

Celebrating the equaliser at Eastlands

It might have taken a change of manager – and philosophy – for Murphy’s quality to shine but you can’t begin to discuss the extraordinary turn of events that carried Fulham from checking out the Championship ground guide to stunning salvation without highlighting his contribution. For a start, Murphy’s experience and calmness must have counted just as much behind the scenes as it did on the pitch. Then there were the displays that typified a man who’s always refused to concede defeat. He ran the midfield during Fulham’s first away win in thirty three games at Reading – an almost improbable result that had us daring to dream – and that pulled the strings during that staggering second half turnaround at Manchester City. Murphy might have missed possibly the most high-pressure penalty of his career, but had the presence of mind to follow-up and place the rebound beyond Joe Hart with the minimum of a fuss. A point was a terrific result, but a simply magnificent pass freed Diomansy Kamara in injury-time, and the Great Escape was on.

Of course, Murphy’s central role in the drama was still to come. We all remember that glancing header that secured safety on a glorious afternoon at Portsmouth. But what made that afternoon all the more poignant was that the man who wasn’t supposed to be in the opposition penalty area at an attacking set piece – and was just about to substituted – very nearly didn’t make it to Fratton Park at all. Murphy’s young daughter had been rushed to hospital with dehydration the day before the game and, being the devoted family man that he is, Murphy waited with his wife and little girl rather than making the journey to the south coast with his team-mates. Fortunately, his daughter was well enough to recover the following day but, not being a father myself, I can only imagine the emotions that must have preceded what was an already tense weekend. 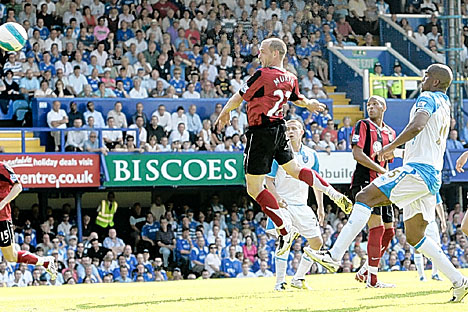 The Fratton Park header that sealed the Great Escape

Once Brian McBride had decided to return with his family to America, Roy Hodgson installed Murphy as the likeable forward’s replacement as captain. It proved a masterstroke. During his time at Fulham, Murphy has been a shining ambassador for the football club in the community and with the supporters – and when he hasn’t been available, his wife has been more than willing to converse with the fans on Twitter. More than that, the captain has been a mentor to younger players and a quiet, but unmistakable, leader on the field. His partnership with Dickson Etuhu, much criticised when Hodgson grew tired of Jimmy Bullard’s antics, blossomed into one of stability and reassurance, providing the platform for Fulham’s highest-ever finish in the top flight.

That meant Europe – and we all know what happened next. Murphy made 41 appearances during a marathon season, that began in Lithuania in July when he tucked away a penalty with his customary efficiency and ended with such cruel heartbreak in Hamburg. Murphy missed a fair chunk of the campaign through injury – as well as the momentous win over Juventus through suspension – but made up for it with that majestic pass to free Simon Davies for the vital equaliser in the second leg of the semi-final against Hamburg. 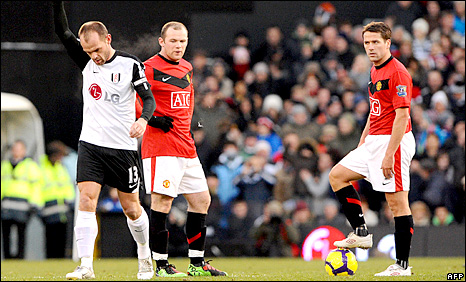 I simply can’t list all of the magic moments during his five years at the Cottage – he’s become such an indelible part of the football club that he seems far longer – because this article would ramble on for too longer. But we’ll remember with great affection the way he artfully gave Thomas Kusczak the eyes and sparked a splendid win over Manchester United with an effortless strike from long range a matter of days after the Whites reached the Europa League knockout round in Basle. His two spot-kicks in the FA Cup demolition of Spurs were Murphy’s only goals of the following campaign but there were oh, so satisfying. His deflected strike that pegged back a seemingly unassailable Manchester City last September will live long in the memory too.

There’s a sadness in that you felt Murphy had more to offer. He’s an intelligent thinker about the game, destined to become a coach and probably a manager in time, too. But without the captain there in central midfield, Fulham look a far poorer side. Martin Jol’s got a clear brief to reduce the average age of the side and Murphy wants to be a regular starter at this stage in his career. You can’t quibble with either position but does seem strange that a player of Murphy’s quality should need to drop down a level to secure the status he wants. 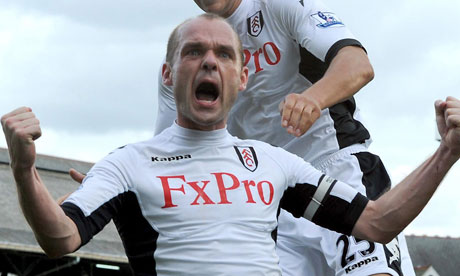 Celebrating the equaliser against Man City

Football can’t be reduced to mere statistics but Murphy’s Fulham record deserves a mention. Since August 2007, he has made 220 appearances for the club and scored 29 goals. It doesn’t sound like much, but they’ll be very few players who are as consistent as Murphy at the highest level and amass such a record over a relatively short space of time. The speculation has already started about who might fill his shoes. It should cease. Danny Murphy’s irreplaceable: both on and off the field. All that remains is thank him for a multitude of memories and move on – as sad it as it will be.