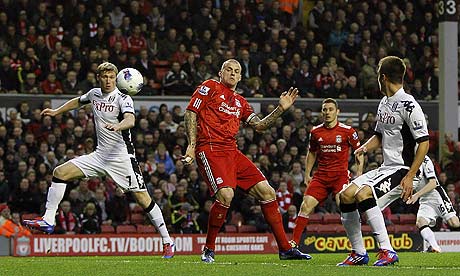 What a difference a few days make. After Saturday’s mauling at Everton, few people connected with Fulham would have fancied another trip to Merseyside tonight, especially as the Londoners’ record at Anfield was so dismal that it didn’t include a league win amongst a litany of heavy defeats. Those who did travel were rewarded for their faith as a deflected sixth minute strike from former Liverpool winger Alex Kacaniklic gave the visitors, again coached by the vociferous Billy McKinlay in the absence of Martin Jol, a memorable victory and took them level on points with their hosts. This was hardly the way Kenny Dalglish would have envisaged preparing for Saturday’s FA Cup final.

Dalglish made nine changes ahead of the weekend Wembley showdown with Chelsea – leaving Steven Gerrard and Luis Suarez out of his squad entirely – but his attempts to freshen up the hosts backfired as Liverpool looked lost and laboured. They were defensively suspect from the off and went behind after just six minutes. Clint Dempsey run at the retreating centre backs and slipped ball out to John Arne Riise, who enjoyed an excellent offensive evening against his former club. Riise’s low cross found Kacaniklic at the near post and the Swede’s shot beat Alexander Doni with the aid of a hefty deflection off Martin Skrtel. It was Fulham’s first goal at Anfield since Collins John equalised in 2006 – Liverpool scored five that night, but in truth Fulham never looked like surrendering this lead.

The visitors might have extended their advantage ten minutes later. Dempsey once again was the architect, pulling Liverpool’s defence all over the place after being found by Kacaniklic and his lofted ball freed Pavel Pogrebnyak only for Doni to make a fine sprawling save. Three minutes later, Sebastien Coates was forced into a fine sliding challenge to prevent the lively Kacaniklic from exploiting more space in the Liverpool box. By contrast, the hosts were restricted to long range efforts from Jordan Henderson and a set-piece header from Skrtel.

So flat was the atmosphere inside Anfield stand-in manager McKinlay could be heard barking constant instructions from the technical area to his Fulham charges. It took until midway through the first half for Liverpool to muster their first real effort with Dirk Kuyt dragging a shot across goal and the home side only generated a real spell of pressure just before the break. Their best opportunity came when Mark Schwarzer spilled a cross under pressure from the recalled Andy Carroll and Jonjo Shelvey’s low shot was calmly cleared off the line by Brede Hangeland. Schwarzer then saved well from Carroll – but Liverpool failed to build on any momentum early in the second half.

Fulham looked well organised at the back with Aaron Hughes outstanding on his 200th start for the club and Hangeland seemed intent on proving that his disappointing display at Goodison Park was a one-off. The Norwegian produced a perfectly timed challenge to stop Maxi Rodriguez in his tracks just as the Argentine prepared to pull the trigger inside the area, but the visitors carried just as great a threat. Kerim Frei wasted no time after replacing Kacaniklic in skipping past Martin Kelly and clipping the outside of the post with a confident strike.

The Swiss teenager then slipped a clever ball between the Liverpool centre backs to send Dempsey clear on goal but the American failed to notch a 23rd goal of his terrific season thanks to a splendid save from Doni. The Texan also almost profited from a misjudged back-header by Coates but the Brazilian goalkeeper blocked Dempsey’s snapshot with his legs. Liverpool did apply pressure towards the end, with the home fans briefly enlivened by the late introduction of Raheem Sterling, but they failed to seriously trouble Schwarzer. Dalglish will turn his attention to Wembley reflecting on a poor run of form that his seen his side win just three of their last thirteen league fixtures.