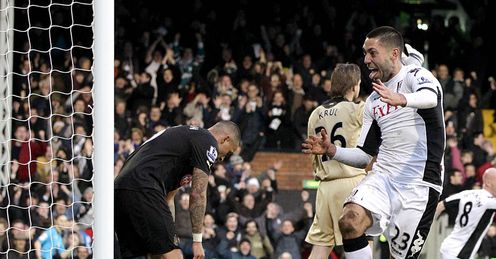 Fulham’s discussions with Clint Dempsey about a new contract are pretty timely if weekend reports from Italy are to be believed. The Italian media are claiming that the American is interesting both Roma and AC Milan, with the Giallorossi reportedly preparing an initial bid for the American midfielder.

Roma are now owned by Tom Di Benedetto, who bought out the Sensi family last September, and the American entrepreneur apparently sees the potential signing of Dempsey, one of the mainstays of Jurgen Klinsmann’s national side, as an opportunity to tap into the US market. Dempsey, who has scored eighteen goals in a superb season for Fulham, has started preliminary talks with the club about a new three-year deal to stay in London but has made no secret of the fact that he would like to test himself in the Champions’ League at some point.

Calciomercatoweb suggests that Roma would have to ward off interest from AC Milan in the Texan, though, and with Massimiliano Allegri’s side currently two points clear at the top of the table, a move to the Rossoneri might be a real temptation for Dempsey, whose current contract expires in fifteen months time.