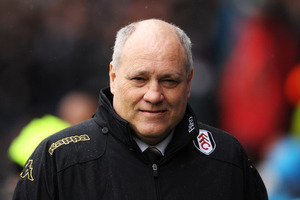 Martin Jol is setting his Fulham side a lofty target for the remainder of the season – hinting that they could finish as high as sixth, but admitting a top half placing is far more realistic.

The Dutch coach is content that there is now a considerable gap between Fulham and the sides battling to stay in the Premier League as relegation worries have been banished by a run of three straight wins. The last of those, a thumping 5-0 home success against Wolves on Sunday, lifted the Whites to eighth in the table – just three points behind Liverpool.

Our target is still 40 or 41 points and then we try to get as high as possible in the league. If you are very positive then there is Newcastle or Liverpool ahead of us. If you are realistic, there is still a lot of good teams around us so hopefully we could end up in the top 10.

It depends on a lot of things. Clint Dempsey

so if everyone stays fit we’ll get better and better and hopefully we can do something which is nice. Maybe it is a bit different this year because last season it was very awkward as three of the four bottom clubs, even in the last month, escaped.

Only West Ham were relegated from the group so that was an awful season for the likes of Birmingham, who won the Carling Cup

and still got relegated. It is a bit different now because the gap is a lot bigger this year, which is good. At this stage last year the gap between Fulham and the bottom three was four points and now we’re 13 or 14 points off, so that is the relief.