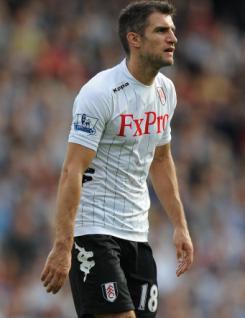 Martin Jol will face an agonising wait over the fitness of Aaron Hughes over the next 24 hours after revealing in his pre-match press conference that the Fulham defender was ‘a big doubt’ to face his former club Aston Villa at the weekend.

Hughes has been struggling with a calf injury this week and was pressed into service as a right back against Wolves last weekend after injuries and personal problems deprived Jol of Stephen Kelly and Chris Baird. With the pair unlikely to be available at Villa Park on Saturday, Jol is sweating over the fitness of the Northern Ireland international.

Aaron Hughes has got a little problem with his left calf and withdrew from training. Hopefully he can be involved but he is a big doubt.

If the 32 year-old fails to make the starting line-up, it could leave Jol with a headache over who to field at right back. The Fulham manager confirmed that Kelly, who has been on the sidelines since withdrawing from the Republic of Ireland squad last week with a thigh strain, isn’t likely to return to training until Tuesday. Baird, an important utility player for the Whites who has regularly filled in at full-back, is also out due to personal reasons.

Jol did suggest that Mahamadou Diarra, who enjoyed an impressive cameo as a second-half substitute against Wolves on Sunday, might have done enough to earn a first start for the club.

With Diarra, you could see that he needs a couple of games and it’s not easy to say ‘play two or three games and get 90 minutes’. In training he looks good, he’s probably 80 per cent or 90 per cent fit and now it’s a decision to make if he starts or let him come on again.

The Dutch will also welcome Bryan Ruiz back to the squad after the Costa Rican missed the 5-0 win over Wolves through illness.

Bryan Ruiz is back. He was ill last weekend. He had a virus and stayed in bed for a couple of days but he’s back now.