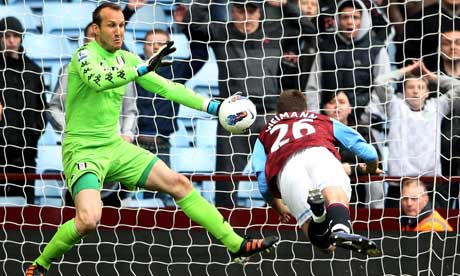 The Fulham manager instead insisted that there was a collective failure to defend the situation properly, which resulted in two dropped points:

It is always the same, one or two mistakes can cost you, even in the final minute and that’s exactly what happened. We attacked the ball on the left, we shouldn’t have done that, we should have then had two players in the centre to block the ball but we only had one.

Watching the goal back closely, you can see he’s absolutely right. First, John Arne Riise foolishly dashes from the full-back position to try pinch the ball about 20 yards out. It’s ironic, given how much the Norwegian gets criticised for backing off his winger, that this the wrong decision. It allowed Villa the time and space to work the ball into a central area and the back four doesn’t shift across. Stephen Kelly neither pushed up nor tracked the runner between Hangeland and Senderos, leaving Weimann free to score his first Premier League goal – although he very nearly failed.

None of that is to try and exempt Schwarzer from criticism. He was very quick to hold his hands up via Twitter:

Very dissapointed [sic] about the result. The goal was my fault, I should have saved it. Can only apologise to our supporters!

None of this lessens the pain of Saturday’s late defeat – but it shows the dangers of pub punditry. By my count, Fulham had four opportunities to clear the danger in that move and failed to do so. That sort of defensive lapse is going to be punished.