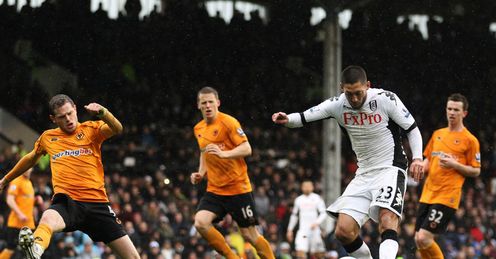 Fulham have began negotiations with Clint Dempsey over extending his contract at Craven Cottage, according to the Daily Mirror.

The American midfielder has scored a remarkable eighteen goals already this season and, with only a year left on his current deal, Fulham are keen to keep one of their biggest assets as they attempt to build on a promising first season under Martin Jol. Dempsey, who scored last week as the United States secured a memorable win over Italy, has always been open about his ambition to play Champions’ League before the end of his career but the paper reports that Fulham are in discussions about a new three-year contract.

The Mirror quotes Jol as saying:

We are talking to him. At any club, you want to keep your best players so that is what we try hard to do. If Clint Dempsey weren’t here, we wouldn’t be in this position because we have had to rely on him a lot of times to score goals.

Jol also revealed that Fulham have offered new contracts to Andy Johnson and skipper Danny Murphy, who will both be free agents come the summer as things stand.

I hope the four or five players we are talking to will stay. I am confident they will. They realise it is a very good club.