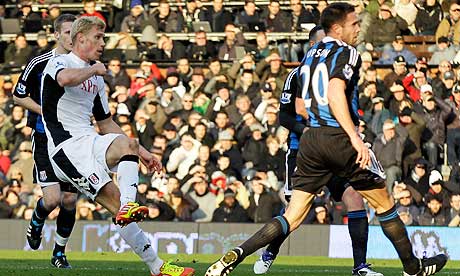 Stephen Kelly has been impressed by Pavel Pogrebnyak’s start to his Fulham career and has tipped the new signing to fill the gap left by Bobby Zamora.

The Russian striker scored the opening goal as the Whites grabbed a morale-boosting win over Stoke and the Stuttgart loanee’s performances in training have convinced Kelly that Pogrebnyak could have a big impact in the remainder of the season.

If he continues like that, I’m sure he’ll be fantastic for us. He made the impact we wanted. n the couple of days training we had with him, you could see he was the type of striker that will keep the ball well and wants to score goals.

He’s strong, he’s a big boy and he’s exactly what we need to link up play and it’s probably what we were lacking in the last couple of games. We were kind of screaming out for a centre forward now Bobby Zamora is gone – a target man that can bring people into the game and that’s exactly what he did.

It was a great debut for him. We’re all delighted to have him in the team and hopefully he can put performances like that in again.