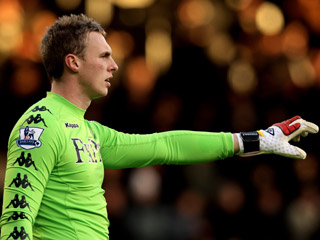 Quite a detailed interview with David Stockdale, whose impressive performances whilst deputising for Mark Schwarzer have been one of the catalysts for Fulham’s recent upturn in form, on this offal this morning.

The 26 year-old is very complimentary about Ipswich and speaks of how he enjoyed his loan spell in the Championship – indeed, you can see how he’s benefited from regular first-team football in his confident displays of late. He’s a pretty modest and unassuming character, though, insisting that his strong performances in 2010/11 don’t really count for too much:

I look back and do like to think that I did well, but at the end of the day, I was just doing what I am supposed to do. I’m in the team to keep goals out and it was a positive period for me. Following last season, I think it was important for me to go out and continue my development, and I suppose I’m on another chapter of my career now. I want to do well again and enjoy a similarly productive spell – I need to prove that I have what it takes to be number one.

Stockdale’s obviously confident in his own ability, too, insisting that he doesn’t have much to prove at Fulham:

Both goalkeepers have benefited from Fulham’s well-organised defence over the past few years and, despite a little blip earlier in the season, that solidity will be key as the Whites try and push on to finish in the top half.

It makes an unbelievable difference to be honest, and those boys work very, very hard. From AJ up top, right the way back, the commitment is fantastic. There is so much experience in this team, and the majority of the squad have been through a lot together. Just look at the back four alone, they have so many international caps between them. For me, we have one of the best defences in the Premier League and to get through those guys you know you have done well.

Whilst Fulham have shipped goals to the likes of Manchester United in large degrees, both Schwarzer and Stockdale have also kept a high number of clean sheets this season. Indeed, Stockdale’s record in that regard is very impressive since he joined the club:

Before Mark’s injury he had kept six in the league. I kept a clean sheet in my return against Bolton, so that was good, and is of course, something that all ‘keepers want to do. I want to add to that tally, because like Mark I take great pride in keeping the opposition out. For a goalkeeper or defender, keeping a clean sheet is like a striker scoring a goal – that’s what we want. If we can do our job at our end of the pitch then it makes the others’ job at the other that bit easier too.

He’s fully focused on finishing the season well with Fulham and perhaps proving to Jol that he’s good the capabilities to keep his place in the side. There’s not a mention of making the England squad for Euro 2012 – although it must be on his mind:

We know that we tend to have a stronger second half of the season, and with the togetherness that this squad has I think we’ll move onwards and upwards – I think this Club will be in the Premier League for a long time to come. For me personally, well, my concentration is fixed firmly on Fulham and hopefully between now and the end of the season I can play as much as possible, and play well in that time too. There’s a lot that can happen in that time, but I’m excited about the possibilities.