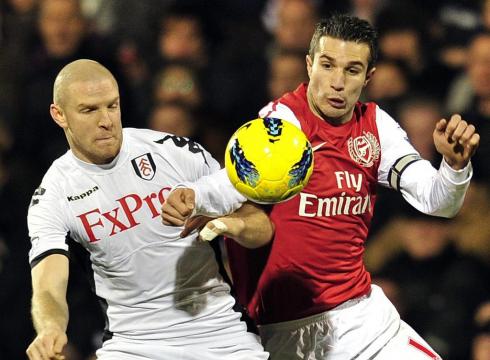 Philippe Senderos wants Fulham to end a successful week on a high by beating Charlton in the FA Cup tomorrow afternoon and continuing the form that saw Martin Jol’s side defeat Arsenal on Monday.

The Swiss centre back admitted that the players felt they needed to lift their game for the Craven Cottage fans after their drubbing by Manchester United before Christmas. Victory was all the sweeter for Senderos, who was released by Arsene Wenger two seasons ago, as we could tell from his reaction at the final whistle.

I think we needed a good performance at home on Monday night since the last one was against Manchester United. We needed to bounce back against Arsenal.

We put in a good performance against Norwich last weekend and we were disappointed to only come away with only one point. I think the character of the team showed in the game against Arsenal and this week has been a good week.

I thought the crowd was amazing against Arsenal and also at the away games. That’s what we need. The League is so tight that every detail is important and a good crowd behind us is a massive boost to the team.

Charlton, who currently lead League One, will bring 7,000 fans to the Cottage for the third round tie and Senderos knows that Fulham can’t afford to be below their best.

Charlton are certainly a team on the rise. They’re top of League One and we know they’re a team that belongs in the Championship or the Premier League.

They have a lot of quality and we won’t be taking them lightly, especially in an FA Cup game. We’re going to have to put a good shift in to get a result on Saturday.

The 26 year-old defender also paid tribute to the hard work of the club’s medical team in helping him through a difficult time with injuries after he joined the club.

Last year after the injury I needed to get back to playing and full fitness. I worked really hard with the Sports Medicine and Exercise Science Department to put me back into shape and I’m really happy.

I want to thank everyone at the Club for supporting me and sticking by me through tough times. Hopefully now I’m giving the Club something back through my performances on the pitch.