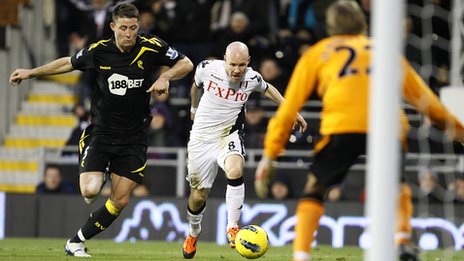 Sky Sports claim that QPR are heading the queue in the race to sign Fulham’s Andy Johnson this month.

The former England striker has turned down Fulham’s offer of a contract extension and, with his current deal expiring at the end of the season, the Whites are prepared to listen to offers for the 30 year-old rather than lose him for nothing in the summer. Johnson, who has been missing since Fulham’s defeat by Manchester United before Christmas with a groin injury, has scored 11 goals in 26 appearances for Fulham this season and has been attracting serious interest from a number of Premier League sides.

Blackburn were thought to be in pole position as Steve Kean prepares a £2m offer for the former Everton striker to help supplement his attacking options, but QPR have retained an interest in Johnson despite bringing in Manchester United’s Federico Macheda on loan. Neil Warnock is keen to add greater firepower to his squad and has targeted Johnson, who scored a hat-trick against Rangers, back in October, as a potential acquisition.