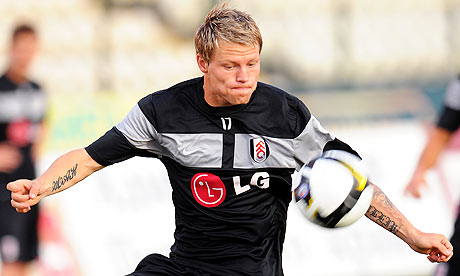 The Norwegian winger has only appeared in four games for the club since Jol replaced Mark Hughes this summer – and all of them were early European qualifiers – and was loaned out to Portsmouth in September. It was a largely frustrating spell at Fratton Park for the 28 year-old, who played just two games for the Championship side, and Jol is happy to allow Riise to leave as he has only six months left on his current contract.

The Fulham manager admits that he is well stocked in the wide areas and the competition for places makes it difficult to see a future for the young brother of left-back John:

He’s such a good lad and good player, but in that position I’ve got Bryan Ruiz, Moussa Dembele, Damien Duff and [Pajtim] Kasami.