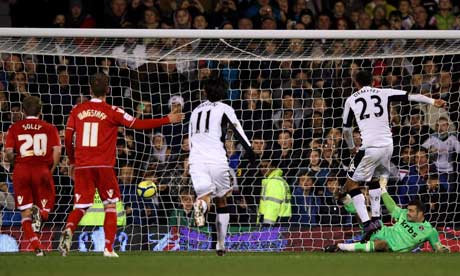 Martin Jol reserved fulsome praise for match-winner Clint Dempsey after the American’s first ever hat-trick sunk Charlton Athletic in the FA Cup at the weekend.

Dempsey’s three goals ensured that the Premier League side avoided a potential banana skin against the League One leaders at Craven Cottage and Jol touched on his midfielder’s battling qualities that have made him such a key part of the Fulham side in recent years.

He’s a great sportsman. He trains hard and looks after himself. He’s an American boy and in every training session he wants to win. He’s got the eye of the Tiger.

Jol also revealed that he has changed the Fulham formation from a 4-4-2 to a more fluid 4-1-4-1 in part because he helps to get the best out of Dempsey.

In a 4-4-2, although he’s not a real wing player, he still scores goals. Now I feel this [formation] suits him even more because he’s more like an attacking number 10. He plays in this position for the national team as well and it’s a great joy to know he can play in different systems and perform different functions.