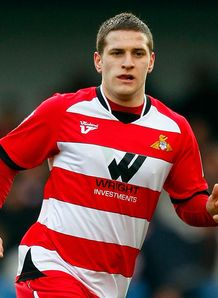 The Leicester Mercury follows up other reports with another story this morning claiming that Fulham could hijack Billy Sharp’s proposed move to Leicester City.

The Foxes have agreed a fee, thought to be around £1.85m, with Doncaster for the in-form striker but Martin Jol is considering making an approach for the 25 year-old. Sharp is also interesting a number of Championship sides and, after being expected to move to Leicester, would be interested in proving himself in the Premier League. Fulham are thought to view Sharp as a possible replacement for Andy Johnson, who is likely to leave Craven Cottage during the transfer window, having turned down a new contract with the club.

Sharp has yet to agree a new deal with Doncaster leaving the Championship strugglers with a big decision over his future. Sharp met with manager Dean Saunders on Tuesday and has been offered a new two-and-a-half year deal to stay at the Keepmoat Stadium, but Leicester’s offer is thought to be significantly higher. Saunders is still expected to select the striker for Saturday’s league game against Cardiff as Sharp averages a goal every other game for Rovers.