Dembele ruled out of Cup tie 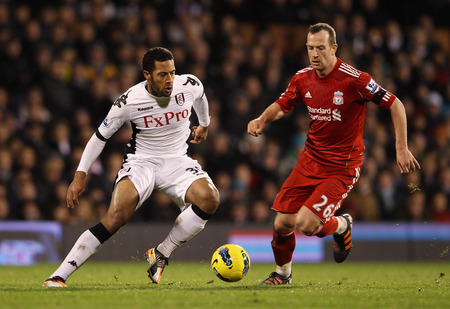 Fulham will have to do without Moussa Dembele for their FA Cup fourth round tie at Everton on Friday night after the Belgian international failed to take part in training this morning.

The 24 year-old picked up a hip injury that forced him to be substituted midway through the first half of Fulham’s defeat at Blackburn a fortnight ago and he missed the 5-2 win over Newcastle on Saturday. Martin Jol’s options up front are somewhat limited with striker Orlando Sa still sidelined with a hamstring injury and the Fulham manager’s big decision will be whether to pair Andy Johnson with Bobby Zamora up front after the former Everton striker turned the game when he came on as a substitute against Newcastle.

The man Johnson replaced could keep his place in central midfield despite having to be taken off early on Saturday having come off worse when challenging for a 50-50 ball. Steve Sidwell has trained regularly since the game at the weekend and is firmly established as Jol’s first choice partner for Danny Murphy in midfield, although Chris Baird turned in a dominant display as a half-time substitute. Fulham will still be without long-term absentees Zdenek Grygera and Mark Schwarzer, although the veteran Australian goalkeeper has now returned to training following his spinal injury.