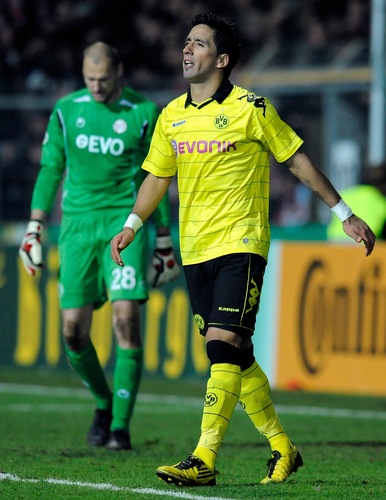 Lucas Barrios could be on his way to Fulham, according to a report in the German sports magazine Kicker.

The Paraguayan international is set to leave Borussia Dortmund after falling out with manager Jurgen Klopp but the Bundesliga club are reported to value the 27 year-old at £10m. Barrios, who has struggled for form and fitness with Dortmund this season, has been linked with a whole host of top European clubs, including Real Madrid, Arsenal and Liverpool. His rumoured £100,000-a-week wages are likely to be a problem in any negotiations.

Barrios, with his suitcase in tow, went on a final lap of honour after Dortmund’s 3-1 win over Hoffenheim on Saturday and was allowed to miss training yesterday. Bild claimed that he was already in England, finalising negotiations with his preferred club.