Routledge set to start against Fulham? 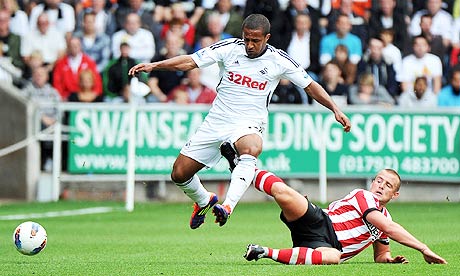 Routledge has only made six league starts for the Swans this season but impressed Rogers went he came off the bench to good effect in the defeat at Blackburn last weekend. With Joe Allen suspended after his sending off at Ewood Park, the Swansea boss will need to reshape his midfield and he gave a strong hint this afternoon that the 26 year-old winger could start against one of his former clubs:

We would rather have Joe with us, of course, because you want your best players available as often as possible.  But the players who came on at Blackburn did terrifically for us. I thought Wayne Routledge was outstanding when he came on.

You need your front players to create goals and score goals and, whenever Wayne has played in his favourite position, he has done that. He was excellent last Saturday and he is really pushing to get in the side.

Routledge spent the 2006-07 season on loan at Craven Cottage from Tottenham, making 28 appearances and scoring his only goal against Leicester City in the FA Cup.