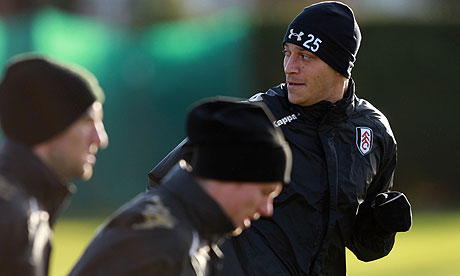 Martin Jol made Bobby Zamora train with Fulham’s reserves today, according to a report in tomorrow’s Daily Mail.

The England striker felt he was ready to face Manchester United at Craven Cottage on Wednesday, having missed Saturday’s win over Bolton Wanderers after failing a fitness test on a knee injury, and was surprised by Jol’s intervention. He reportedly accepted his manager’s instructions without complaint but feels he is being frozen out at Fulham and will move on come the January transfer window should the club accept an offer for his services.

The report concludes by adding that Fulham sources insisted that the training session Zamora took part in was ‘a recovery session’ run by first-team coaches but with the former West Ham and Tottenham forward desperate for game time to prove his worth to Fabio Capello in the run-up to Euro 2012, Jol’s action may only serve to hasten his exit. It would be a brave move from the Fulham manager who is no closer to securing the long-term services of Andy Johnson, whose contract expires in the summer.

UPDATE: Martin Jol dismissed the speculation at his pre-match press conference this afternoon. He insisted that Zamora is available for selection against Manchester United tomorrow night:

Bobby is fit to be in the squad so we’ll make a decision on the team tonight. Bobby trained yesterday with the group that didn’t play on Saturday, which included Aaron Hughes, Pajtim Kasami, Marcel Gecov and the other players that didn’t start against Bolton.