Hangeland: We must get balance right 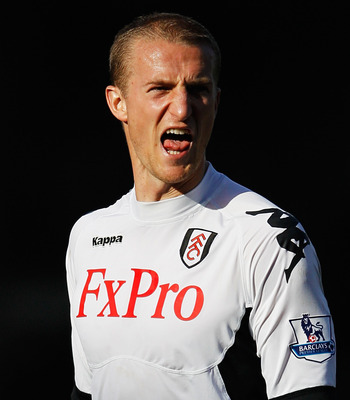 Brede Hangeland wants to put the misery of last year’s thrashing by Liverpool behind him with a strong Fulham performance this evening.

The Whites were beaten 5-2 by Kenny Dalglish’s side at Craven Cottage last year as Maxi Rodriguez scored a hat-trick. Hangeland, who had a poor game that night, wants to replicate the kind of defensive display that earned a point at Arsenal last weekend and knows Fulham will need to be careful of Liverpool’s attacking prowess.

The Norwegian centre back knows that manager Martin Jol wants his side to score more goals, but Hangeland insists it is imperative that Fulham retain the right mix of adventure and control if they are to secure a much-needed result tonight.

We had a bit of a horror show against Liverpool last season, so we hope to do a little bit better than that.

We have to get the balance right. We want to dominate games, especially at home, but we can’t go gung-ho and leave too much space in behind.

It will be another tough challenge.