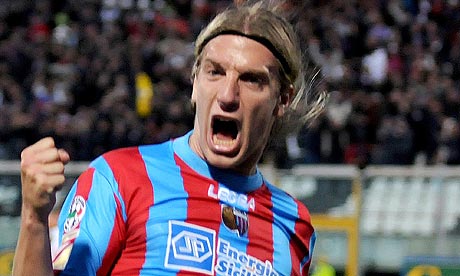 Fulham have been linked with an €11m move for Catania’s Argentine striker Maxi Lopez.

The 27 year-old appears certain to leave the Italian side in January and has attracted interest from the likes of AC Milan, Genoa and Fiorentina. The former Barcelona forward is also being monitored by French giants Olympique Marseille. Martin Jol’s chances of snaring Lopez are limited however by Catania’s extremely high valuation and his rumoured £60,000-per-week wages.

Lopez has scored 22 goals in 65 appearances for the Serie A side since signing from Gremio last January. In his single season with the Brazilian outfit, Lopez managed 12 goals in 25 games. Prior to that he spent two seasons with FC Moscow in Russia, scoring nine in nineteen games. He endured a disappointing spell with Barcelona, managing just one goal in 14 appearances, and was loaned out to Mallorca. Lopez, who was capped 29 times for Argentina’s under-20 side but never called up to the senior squad, began his career with River Plate.