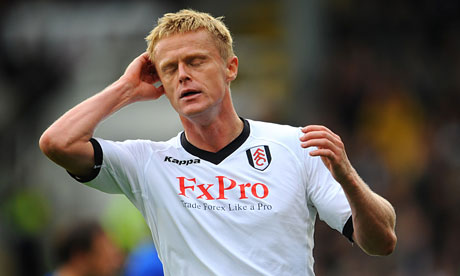 Martin Jol has revealed that Damien Duff is probably out of Monday’s meeting with Liverpool after aggravating a calf injury against FC Twente tonight.

The Republic of Ireland international was not expected to start in the Europa League tie after missing Saturday’s draw at Arsenal but was passed fit to play. However, Duff’s comeback lasted just 34 minutes before he was replaced by teenager Kerim Frei. Jol feels the 32 year-old winger will not recover in time to face Liverpool at Craven Cottage on Monday:

Duff has (suffered a recurrence) of the old problem with his calf injury that kept him out for two weeks. “He came back and had the same problem, but hopefully Dembele is fine. Damien could be a doubt but I expect Mousa to play and Clint (Dempsey) could return (from a thigh problem).