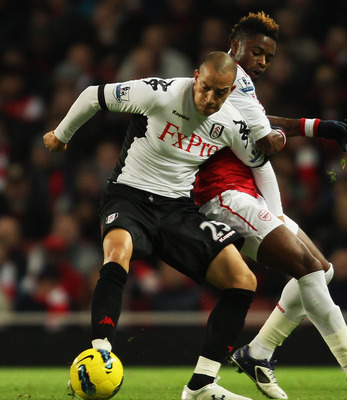 Martin Jol believes Bobby Zamora is one of the best target man in the country.

The Fulham manager sung the praises of his England international ahead of his side’s Europa League tie against FC Twente tomorrow night. He firmly believes that the 30 year-old can book a place on the plane to Poland and Ukraine as part of England’s squad for the European Championships and admits Zamora is a crucial part of his side.

Zamora has struggled with form and fitness at times this season, but Jol expects him to start against Twente as Fulham chase the win to secure qualification from Group K:

We feel we have a situation where we have players that can replace him if it is getting a problem. I think he has a good rhythm now and if there is a physical problem, he will tell me. We will make an assessment and I feel Bobby is a typical number nine for us.

He is different playing for England and, while you can always pick up an injury, I feel he has a great chance of going to the European Championships. Bobby is a target man and holds up the ball. He does that very well and is probably the best in England or one of the best.

The only thing you hope for is by the end of the season he gets an average of 10 or 12 goals and I am 100 per cent certain [he will]. Clint [Dempsey] did that before as a wide player, scoring 13 goals in the league.

Jol took reports to task during the press conference for suggesting that he had implied Zamora needed to score more goals after Fulham’s draw at Arsenal at the weekend.

In the last five in the league, we conceded three so we are pretty organised and we create chances, as you saw against Arsenal. Against Sunderland and against Wigan – when we won 2-0 – we were very close.