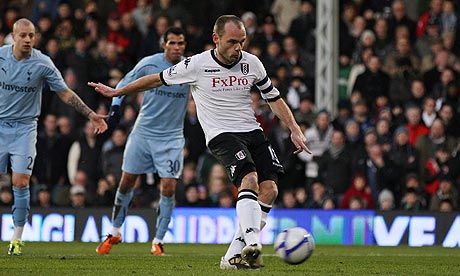 Danny Murphy is Fulham’s only new injury worry ahead of the London derby with Tottenham on Sunday afternoon.

The Fulham captain was taken off midway through the second half of the Whites’ comfortable win over Wisla Krakow last night as a precaution after picking up a slight knee injury. The 34 year-old midfielder is expected to recover in time to face his former club at Craven Cottage on Sunday, but the club’s medical staff will monitor his progress closely over the next couple of days.

Martin Jol will welcome back Bryan Ruiz, who was ineligible for the Europa League tie, and Moussa Dembele, who was suspended following his red card in Krakow, into his match-day squad. Fulham are definitely without the services of striker Orlando Sa, who could return to training next week as he recovers from  a hamstring strain, while centre backs Aaron Hughes and Philippe Senderos are both sidelined by thigh injuries.