Dembele sees Spurs as ‘step up’ 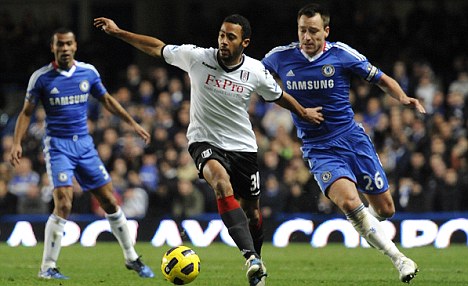 Moussa Dembele is interested in making a move to Tottenham and describes the north London club as a ‘step up’ from Fulham.

The Belgian forward has been linked with a transfer to Spurs since his terrific performance in last season’s FA Cup rout of Tottenham at Craven Cottage. Harry Redknapp had a reported £10m bid rejected on the final day of the January transfer window and rumours of an increased offer resurfaced after Dembele’s impressive performance in the 3-1 defeat by Spurs last Sunday.

In his first comments on a potential move, Dembele – who has been linked with a host of top clubs since joining Fulham from AZ Alkmaar for £5m last summer – told De Standaard that he would be interested by a transfer:

Yes, I heard that. It would obviously be a step higher, and that has always been my goal.

I did well last season when I was not injured, through many matches for Fulham.

So why not step higher?

Dembele also says he is becoming more of a conventional forward player after encouragement from new Fulham manager Martin Jol, who would doubtless be keen to keep hold of the 24 year-old.

My thinking has changed somewhat. I shoot much more on target. The Fulham coach says that I’m evolving. In the past, I could have gone four games and not taken a shot at goal. That no longer happens.

Each match I shoot four times. I have also scored. Not enough, I know, but it will come.