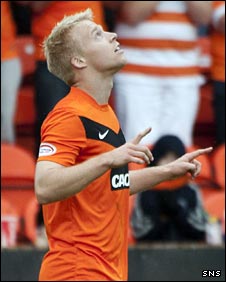 Lauri Dalla Valle is keen to extend his loan spell with Dundee United.

The Fulham striker has enjoyed his time in Scotland and has become a regular feature in Peter Houston’s first team, scoring three goals in nine appearances – including a goal against Dunfermline last weekend. The Finnish under-21 international will begin talks with Fulham next week about extending his stay beyond January:

I am here until January and have been really happy with the way things have been going so far. I came here to play games and the big thing is that I’m getting to do that.

I am happy with the progress I have made and really enjoy playing for Dundee United. I have also been able to score a few goals, like against Dunfermline at the weekend, so it has been a good move for me. Obviously I will need to look at what Fulham and Dundee United are saying in January and I think we will sit down and discuss things.

The former Liverpool striker will be on international duty with the Finnish under-21 side next weekend as they travel to Ukraine for a crucial European Championship qualifier.

We have a European Championship game against Ukraine next week so it’s a very important one. We lost to Sweden last time so need to get back on track but first of all I’m fully focused on the Rangers game at the weekend.